A deal to fear

A deal to fear 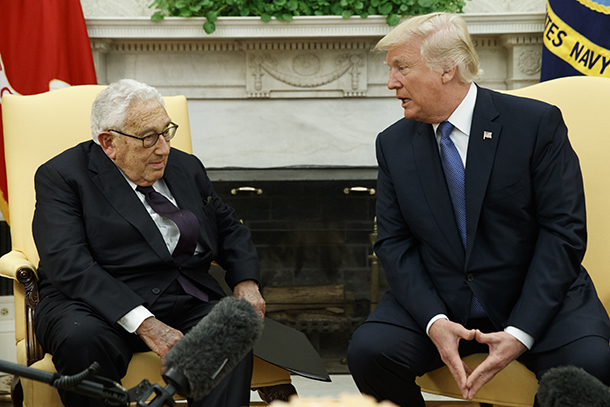 President Donald Trump speaks during a meeting with former Secretary of State Henry Kissinger in the Oval Office of the White House on Oct. 10. [AP/YONHAP]

Henry Kissinger is a colossus. In 1971, he secretly visited China, lifting the “Bamboo Wall” of the Cold War. It was the most dramatic development in the 20th century’s history of diplomacy.

Kissinger’s diplomatic drama is full of paradoxes. His international order is based on superpowers. The destinies of small countries are collateral tragedies, such as Taiwan’s exit from the United Nations and South Vietnam’s defeat. Those are his legacies as a top U.S. foreign affairs thinker.

The North Korean nuclear crisis is harsh, and Kissinger’s proposed resolution is an overarching deal between the United States and China. He wants to use China’s power to remove the North’s nuclear programs. Removing the young dictator Kim Jong-un is a key factor, and the price is withdrawal of U.S. forces from Korea. Trump met Kissinger on Oct. 10. He must have learned a lesson.

Such a deal would be extraordinary, but it also reflects the limits and frustrations of the U.S. The North fired an intercontinental ballistic missile from Mupyong-ri in Jagang Province in June. It is a mountainous area and the North managed dig an underground tunnel and hide its nuclear weapons and missiles.

The North’s concealment skills are extraordinary. The effectiveness of any U.S. bombings on such targets is unclear. “A strike on the North’s nuclear facility is possible but it is unclear if the target will be hit,” Russian President Vladimir Putin pointed out recently. “North Korea is a reclusive country. No one knows 100 percent what is where.”

A decapitation operation — taking out the leadership — is equally difficult. An example of success is the American assassination of Osama bin Laden. But such an ambush is nearly impossible to carry out in Pyongyang. Removing Kim is only possible if there was a traitor in Pyongyang — possibly controlled by China.

The United States has an extremely poor history of negotiations with the North. “Presidents and their administrations have been talking to North Korea for 25 years, agreements made and massive amounts of money paid... hasn’t worked, agreements violated before the ink was dry, makings fools of U.S. negotiators. Sorry, but only one thing will work!” Trump tweeted in two messages earlier this month. The negotiators who were made fools were Christopher Hill and Robert Gallucci. Gallucci met with President Moon Jae-in at the Blue House on Monday. He is an advocate of negotiations with the North, but Trump distrusts such an approach.

Trump met with Chinese President Xi Jinping in Florida last April. Trump said Xi gave him a history lesson in which Xi reportedly said Korea “actually used to be a part of China.”

“He [Xi] then went into the history of China and Korea. Not North Korea, Korea. And you know, you’re talking about thousands of years… and many wars. And Korea actually used to be a part of China. And after listening for 10 minutes, I realized that it’s not so easy,” Trump said.

This demonstrates pretty plainly how Seoul is being bypassed these days. Dr. Kim Kyung-won, who died in 2012, was one of the best pupils of Kissinger. Kim once instructed me in some principles of diplomacy. “A foreign affairs policy eventually boils down to an issue of historical perception,” said Kim. “That shapes the main view of a foreign policy.” Xi’s historical view and Trump’s realization will likely become the basis of a possible U.S.-China deal.

Kissinger is 94 years old. The big Korean deal is an obsession of an old man. The idea is seductive. But there are many arguments against it. One is the strategic value of the U.S. Forces Korea. It is a key asset for containing China.

But others argue a different case. The North’s threat of nuclear terrorism is becoming more substantiated. A terrorist attack on the U.S. mainland is the great fear of the Americans. Escaping from this nightmare is the main challenge of the Trump administration. To achieve this goal, everything is expendable. When a price is high, the return can also be high. The role of the U.S. Forces Korea could be realigned.

On Oct. 18, Xi told the Communist Party Congress in Beijing that his country has to “work tirelessly to realize the Chinese Dream of national rejuvenation.” That dream includes strong influence over the Korean Peninsula. It requires a pro-China regime in the North and withdrawal of U.S. troops in the South. Kissinger considers such a framework equilibrium. And the theory of a big deal means restructuring the power balance in Northeast Asia.

Trump will visit Northeast Asia in November. He will reassure South Korea of a continuing U.S. nuclear umbrella. He will then travel to China. A big deal will be discussed during the Trump-Xi summit. Seoul and Washington must maintain a meticulously coordinated alliance. We must have a strong sense of ownership of our own national security. A sense of national security and the Korea-U.S. alliance are the means to shut down the possibility of Kissinger’s big deal.