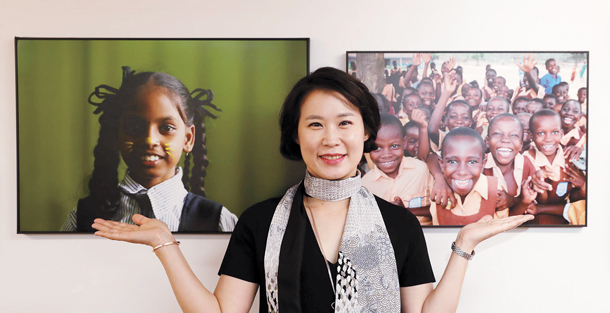 People can now access clean water from a fountain in the remote village at Lake Eyasi, three hours outside the Tanzanian capital of Dodoma, thanks to a South Korean cellist named Kim In-kyung.

“I wanted to perform out of a desire to help sick children in Africa,” said Kim. The purpose of the concerts is to raise funds for the development of remote areas, through World Vision International.

Soul Chamber Orchestra raised 3.5 million won ($3,080) at its first concert in Seoul and over 200 million won over the past eight years. The funds were donated to install water pumps in countries such as Uganda, Ethiopia, Niger and Tanzania.

“In the beginning, the concerts were not well publicized, so we had to cast performers through direct contacts, and we networked mostly through elementary school parents,” Kim explained.

But after the first concert, Soul Chamber Orchestra gained attention thanks to word of mouth and the number of volunteer performers has gone from 12 to 80.

Kim and a few performers put on a performance for villagers at Lake Eyasi in Tanzania last June. Kim said, “Because of clean water from the fountain, the children’s health has improved and the residents have started farming again.”

This year, the theme of the concert is “The Gift,” and the money raised from ticket sales will be used to build a village in Tanzania. Since there are 2,000 seats available, twice as many as normal, Kim expects the donations to be twice as great.

The highlight performance of the concert was Saint-Saen’s organ piece Symphony No.3 by organist Oh Ja-kyung, along with other famous pieces such as Tchaikovsky’s Swan Lake Suite, Piazolla’s Libertango and Kim Dong-jin’s Magnolia.

The concert was held on Oct. 19 at Lotte Concert Hall in Jamsil, southern Seoul.