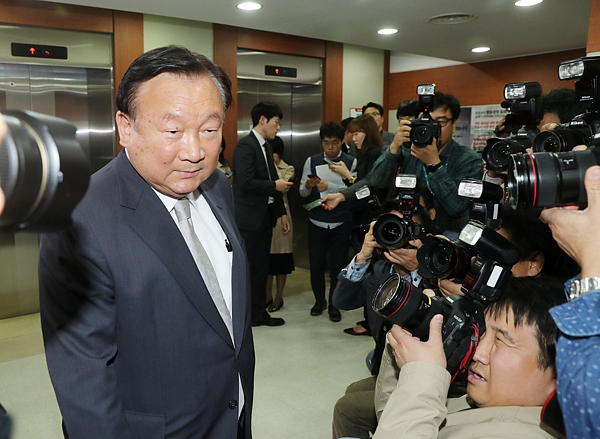 Reporters throw questions at Chung Joo-taek, chairman of the in-house ethics committee of the Liberty Korea Party, as he walks into a meeting Friday to decide how to deal with demands to expel former President Park Geun-hye. [YONHAP]

The conservative opposition party’s in-house ethics committee held a meeting in the afternoon and approved the action against Park, who was impeached and removed for corruption and abuse of power. It is the first time a Korean political party urged a former president to surrender his or her membership.

According to party regulations, a member will be automatically kicked out if he or she does not accept the voluntary resignation recommendation in 10 days.

The committee, however, made an exception for Park. If she does not leave voluntarily in 10 days, the Supreme Council will hold a meeting and vote on her expulsion, the committee said - which actually leaves a possibility that the decision may be reversed.

Following the National Assembly’s impeachment of Park last December, the Constitutional Court formally removed her from office in March for allowing her friend Choi Soon-sil to interfere in state affairs for their private gain.

Both Park and Choi are currently undergoing criminal trials on charges of receiving bribes from conglomerates in return for political favors.

Park loyalists opposed the ethics committee’s decision. “It’s been only a few days since we decided to check on Park’s intention,” said Rep. Kim Dae-heum. “We should give her more time.”

The committee issued the same punishments for two of Park’s close associates, Reps. Suh Chung-won and Choi Kyung-hwan. They were recommended to leave the party voluntarily for having committed acts that harmed the party.

The two also have an opportunity to stay in the party. If incumbent lawmakers resist the recommendations, the party needs to hold a general assembly of lawmakers to decide their fates. They will be kicked out if more than two-thirds of the incumbent representatives agree.

Of the nine members of the committee, eight, including its chairman Chung Joo-taek, attended the meeting on Friday. “We agreed that we need the decision to unite the conservatives,” Chung said.

Since August, Liberty Korea Party Chairman Hong Joon-pyo publicly stressed the importance of cutting ties to Park and her loyalists and redefining the party’s image ahead of local elections next June.

Friday’s decision is also expected to add momentum for a conservative merger. The 20-member Bareun Party, created earlier this year by anti-Park representatives who defected from the Liberty Korea Party, is currently split. Some, including Rep. Kim Moo-sung, said they will return to the Liberty Korea Party if Park is expelled. Others say they want to merge with the People’s Party.

Park started her political career in 1997 by joining the Grand National Party, a predecessor of the Liberty Korea Party, and winning a 1998 National Assembly by-election in Daegu. She won three more legislative elections on party tickets. She headed the party twice, first in 2004 and again in 2011, and is credited with salvaging the party after massive corruption and political scandals. Under her leadership, the party managed to do well in elections.

After a renaming to the Saenuri Party, Park was elected president in 2012. The impeachment and removal, however, dealt a fatal blow to the conservative party. The Saenuri Party changed its name again last February to the Liberty Korea Party.

Park has maintained her Liberty Korea Party membership through the impeachment trial and criminal trial over the past months.