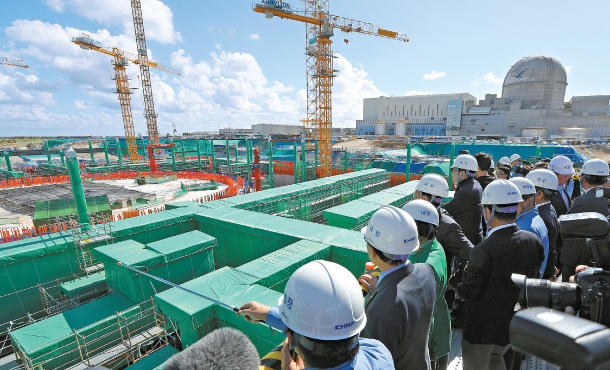 Lawmakers of the National Assembly’s Trade, Industry, Energy, SMEs and Startups Committee visit the construction site of the Shin Kori 5 and 6 in Ulsan on Friday. [YONHAP]

The Blue House said it would honor the recommendation, which was made after months of deliberation by a panel of 471 people randomly selected by a polling firm. They did not include nuclear experts from academia or the industry.

The panel reached its final decision on the fate of the Shin Kori 5 and 6 nuclear reactors near Busan with a vote. Some 59.5 percent voted in favor of restarting construction and 40.5 percent against.

“The final decision is based on the fact that those who supported resuming construction was 19 percentage points higher than those who were for scrapping the construction,” said Kim Ji-hyung, head of the commission that managed the panel during a press briefing at the Gwanghwamun government complex in central Seoul on Friday.

The 19-point gap between supporters and opponents of resuming construction was well beyond the margin of error of 3.6 percentage points.

“Surveys conducted on the panel members during the deliberation process showed that more people were in favor of restarting construction. The number of those in support increased across all age groups as time went on. The rate of increase was particularly acute among people in their 20s and 30s.”

Kim, a former Supreme Court justice, said the percentage of those surveyed who were undecided fell from the 30-percent range at the beginning of the deliberation process to 3.3 percent in the fourth and final survey.

Shortly after the decision was announced, the Blue Hose said it would respect the recommendation. President Moon Jae-in is expected to deliver a resumption order at a cabinet meeting Tuesday.

Left, supporters of completing the nuclear plant rejoicing over the commission’s decision, while at right, those opposed to it express disappointment. [YONHAP]

With the commission’s recommendation, construction of the two reactors will resume nearly four months after it was stopped on June 27 on Moon’s order. The four-month suspension has cost an estimated 100 billion won ($88.3 million) in losses. Moon’s directive to stop construction and review the issues was actually a retreat from his campaign promise to cancel the Shin Kori 5 and 6 construction permanently.

The government’s decision to form the commission and panel of ordinary people to determine the fates of the reactors reflected criticism that cancelling a project that was nearly 30 percent complete would be a waste of the nearly 1.6 trillion won already spent. Cancellation would have also required large payouts to companies contracted to build the reactors.

While a majority of people on the panel sided with resuming construction of the reactors, they agreed that the country should reduce its reliance on nuclear energy, which generates about a third of electricity in Korea.

There are currently 24 nuclear reactors operating in Korea.

Some 33.1 percent of the 471-member panel said the two Shin Koris should have more stringent safety standards than currently applied, while 27.6 percent said the government should invest more in renewable energy source. 25.3 percent said the authorities should come up with measures to better address nuclear waste.

While the commission’s recommendation saved the two Shin Kori reactors, the Moon government’s policy to wean the country off nuclear and fossil fuel energy remain unchanged.

On Moon’s watch, the government will neither allow extension of the originally designated lifespan of aged nuclear plants - which Korean governments in the past have frequently done - nor construction of new nuclear plants beyond Shin Kori 5 and 6. Plans for six new nuclear reactors were scrapped after Moon took office in May.

Shin Kori 5 will be complete in 2021 and Shin Kori 6 in 2022, each designed to operate for 60 years. If Moon’s energy initiative remains intact, Shin Kori 6 will be the last reactor operating when it reaches the end of its life cycle in 2082.

If the commission had recommended the government abandon the two Shin Kori plants, then Shin Hanul 2, which is more than 90 percent complete and scheduled to start up in 2019, would have been the last operating nuclear reactor to generate electricity through 2079.

The fact that a majority of the panel, 53.2 percent, supported downsizing the role the nuclear sector plays in energy supply could give a boost to the government’s move to curb its dependence on nuclear energy.

It was the first time that the government formed a panel of ordinary citizens to determine a public policy. Commission chief Kim said the commission’s three-month mission could be a model for future policies that are controversial and require a consensus. “I find special meaning in that we have discovered the strength of citizenry power through this process,” he told reporters.

“President Moon should apologize before the people for his hasty push to stop the construction and the illusion of a democratic process,” said Rep. Jun Hee-kyung, a LKP spokeswoman. She noted that empowering a panel of ordinary people to decide the fate of the reactors was a wrong move in the first place, because it was made up of “non-professionals” and therefore lacked a legal basis. “It shows how detached the Moon administration is from common sense,” she continued.

The ruling Democratic Party said it respected the commission and panel’s decision and urged opposition parties to refrain from politicizing the matter. It also pointed out the commission’s decision reflected the public’s call for a reduction of reliance on nuclear energy.

“We respect the people’s decision reached through a process of deliberation,” said Greenpeace in a statement, “But we regret that the decision did not address growing dangers stemming from having the world’s highest nuclear reactor density.”