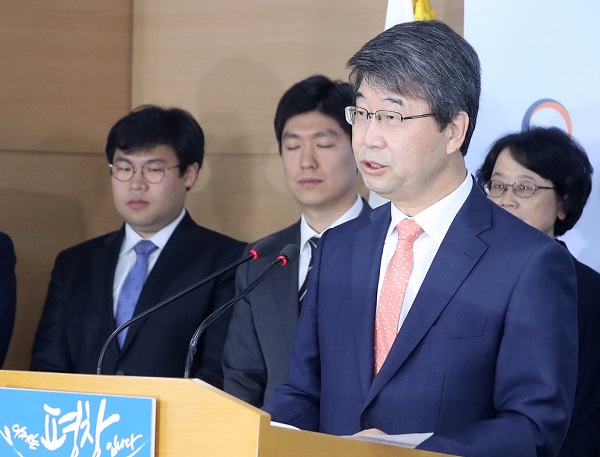 Kim Ji-hyung, chairman of the state commission on Shin Kori 5 and 6, announces the commission’s recommendation that the government resume construction of the two nuclear reactors at the Gwanghwamun government complex in central Seoul on Friday. [YONHAP]

A state commission on Friday recommended the government resume construction of two nuclear reactors that the administration had initially wanted to shutter.

The Blue House said it would honor the recommendation, which was made after months of deliberation by a panel of 471 citizens randomly selected by a polling firm.

The group reached its final decision on the fate of the Shin Kori 5 and 6 nuclear reactors, with 59.5 percent voting in favor of restarting construction and 40.5 percent against.

The government had suspended the project in June, a month after President Moon Jae-in took office. During his campaign, Moon had pledged to wean the country off nuclear energy out of safety concerns.

The 19-point gap between supporters and opponents of the reactors was well beyond the margin of error of 3.6 percentage points.

“Surveys conducted during the deliberation process showed that more citizens were in favor of restarting construction,” Kim Ji-hyung, head of the commission, said during a press briefing at the Gwanghwamun government complex in central Seoul on Friday.

“The number of those in support increased across all age groups as they conducted additional surveys. The increase rate was particularly acute among those in their 20s and 30s.”

Shortly after the decision was announced, the Blue Hose said it would respect the recommendation and carry out measures accordingly. President Moon is expected to deliver a resumption order at a cabinet meeting next Tuesday.

The Shin Kori 5 and 6 reactors were nearly 30 percent complete when construction was suspended in June. Nearly 1.6 trillion won ($1.4 billion) has already been spent on the project.

While a majority of citizens on the panel sided with building for the reactors, they also opined that the country should reduce its reliance on nuclear energy, which generates about a third of electricity consumed in the country.

There are currently 24 nuclear reactors operating in Korea.

If construction of the Shin Kori reactors resumes, completion is scheduled for 2022, with an operational life cycle of 60 years.