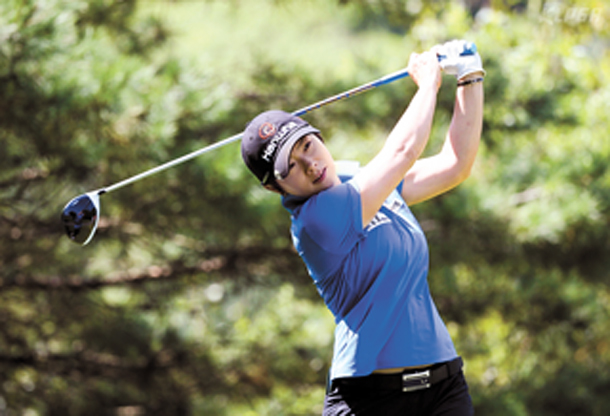 Ji Eun-hee watches her tee shot during the third round of the Swinging Skirts LPGA Taiwan Championship in Taipei on Saturday. [NEWS1]

Eight years and 206 tournaments. That’s how long Ji Eun-hee waited for an LPGA win, and she got it on Sunday when she topped the Swinging Skirts LPGA Taiwan Championship.

Ji entered the Miramar Resort and Country Club in Taipei like a different player this weekend, emboldened by her runner-up finish in the tournament in 2015. Not only was Ji the only player in the field to shoot under-par rounds on all four days, she also never gave up the lead.

In the final round, she headed into the course with a six-shot lead, but her score dropped throughout the day. Still, she managed to finish six shots ahead of runner-up Lydia Ko with a bogey-free round of 65, seven under par.

“It’s a nice day for playing golf today, and I have a really good group with Lydia and Jenny, so I was more relaxed with them and enjoyed playing with them,” Ji told the LPGA.

Throughout the weekend, Ji showed near-perfect iron shots. Under windy and rainy conditions on the third round, Ji had a greens in regulation percentage of 79.1, and in the final round, her statistics were again close to perfect, only missing one fairway and two greens.

After winning two tournaments on the Korean tour, Ji debuted in the LPGA in 2007. Only in her second year did she win her first tournament, the Wegmans LPGA. In 2009, Ji won the U.S. Women’s Open, but since that major title, she hasn’t won a single tournament, the result of a swing change. Throughout her eight-year slump, the best finishes that Ji had were runner-ups.

And up until the Swinging Skirts event, Ji only had two top-10 finishes this season, at the Texas Shootout in April and the Walmart NW Arkansas Championship in June.

Ji won the tournament purse of $330,000. Her victory has allowed Korean golfers to tie in record number of wins this season at 15, the same record as in 2015.

With only four more tournaments remaining this season, another victory by a Korean golfer would set a new record in most number of wins in a single season.

“I’m so happy and excited because I haven’t won for the past eight years,” Ji told the LPGA. “So I was waiting for this moment for so long, so I’m super happy right now.”

Ryu So-yeon, ranked first in the world, finished tied for third, shooting a round of 65, seven under par, on the final day, while Park Sung-hyun, ranked second in the world, finished tied for 42nd at eight under par this weekend. With Park’s disappointing finish this weekend, Ryu has extended her lead in points for Player of the Year and world ranking.

The LPGA Tour will continue Thursday in Malaysia with the Asian Swing at Sime Darby.