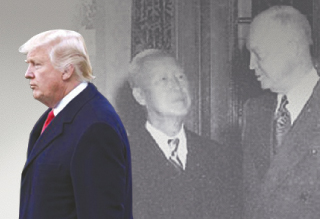 U.S. President Donald Trump’s upcoming visit to Korea, scheduled for Nov. 7 and 8, is perhaps the second most important visit by an American president following Dwight Eisenhower’s in December 1952. During his presidential campaign, Eisenhower made a pledge that he would visit Korea before his inauguration to end the Korean War quickly, as the negotiations for a truce went on for months. The U.S. president-elect landed at Yeouido Airport and stayed in the 8th Army headquarters in Dongsung-dong. He listened to situation reports by U.S. generals and observed the frontline of the war from aboard a military plane.

Eisenhower avoided meeting South Korean President Syngman Rhee, who insisted on unification. He also boycotted a Korean welcome ceremony. Cabinet ministers on the stage and hundreds of thousands of people who had gathered for the event dispersed in disappointment.

Rhee, however, did not give up. In bitter December cold, Rhee, wearing a suit without a coat, paid a forced visit to Eisenhower, who was making an inspection of the Korean military’s Capital Defense Division. One of the U.S. generals gave Rhee a field jacket to protect him from the cold.

Rhee was not satisfied with the brief meeting. He sent Seoul Mayor Kim Tae-sun to the 8th Army headquarters to ask Eisenhower to visit the presidential office. Kim could not get past the front gate. Then Rhee sent General Paik Sun-yup. Paik appealed to 8th Army Commander General James Van Fleet and UN Forces Commander Mark Clark. He said Rhee would not be able to command the Korean troops at times of war if Eisenhower did not visit the presidential office.

Eisenhower finally made the visit on his way to the airport. Rhee and Eisenhower agreed to increase the 10 divisions of the Korean troops to 20 divisions and to sign a mutual defense treaty between South Korea and the United States. The war ended with an armistice agreement in July 1953. Three months later, the Mutual Defense Treaty was signed. If Rhee failed to convince Eisenhower to visit his presidential office, Eisenhower’s wartime visit to Korea would have not been remembered as a decisive movement in Korea-U.S. relations.

Trump is coming to Korea in quite a different situation. Eisenhower came to Korea to put an end to an ongoing war, while Trump is coming to prevent another war. The “armed peace” on the Korean Peninsula, ensured by the Korea-U.S. alliance over the last 60 years — one of the products of Eisenhower’s visit — is about to break at any time, which is the background of Trump’s visit to Korea. Whether another apocalypse will take place on the peninsula — triggered either by a North Korean provocation or a U.S. pre-emptive strike — depends on what message Trump will deliver in Seoul.

Signs of promising changes are seen in Northeast Asia for Trump to take advantage of. After China announced an ambitious second presidential term for Xi Jinping at the National Congress of the Communist Party, Beijing will work on U.S.-China relations and Korean Peninsula issues more aggressively than before. Xi’s goal is making China a “moderately prosperous” nation by 2020, the 100th anniversary of the Communist Party’s foundation. A moderately prosperous country describes a society where the people do not have to worry about their basic living conditions and can enjoy cultural lives.

Without stability on the Korean Peninsula and in its neighboring region, building a moderately prosperous society is nearly impossible. Another Korean war will immediately crush Xi’s dream of being recognized as a leader on par with Mao Zedong and Deng Xiaoping in modern Chinese history. China, therefore, will most likely join the international sanctions on North Korea.

If North Korean leader Kim Jong-un continues to ignore Beijing’s warning and keeps on playing a dangerous game of chicken across the border, Xi will likely impose specifically tailored pressure on the North. During his upcoming summit with Trump, a sustainable resolution of the Korean nuclear crisis will be discussed. What we have to wary of is a potential big deal between the United States and China that ignores South Korea. Henry Kissinger and other pro-China figures in the United States are encouraging such a deal.

Trump’s message in Seoul will likely be a warning of maximum pressure and sanctions to force the recalcitrant regime in Pyongyang to end its nuclear and missile provocations and sit down at the negotiating table. Trump is an ignorant yet smart businessman who pursues economic profits while sending spontaneous Twitter messages to shake things up. He will certainly not hesitate to act aggressively and rudely in his meeting with President Moon Jae-in by taking advantage of threats to walk away from the Korea-U.S. Free Trade Agreement and sales of advanced weapons.

If Trump’s Northeast Asia tour proceeds as planned, it will be an unfortunate development for him above all else. Northeast Asia offers a rare stage — and a priceless opportunity — for a third-class politician like Trump to make a leap toward a statesman who prevents war and lays the foundation for mutual prosperity for the Asia-Pacific countries. Even creating a slight thaw in the frozen inter-Korean ties would do his reputation good.