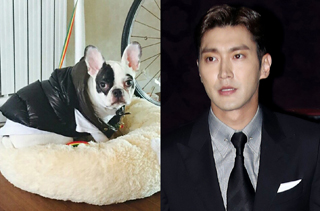 Korean singer and actor Choi Si-won on Saturday offered an apology over the death of a local businesswoman who was attacked by his family’s pet dog (left in the photo above) at an apartment in southern Seoul.

The 30-year-old Choi, who gained fame as a member of the boy band Super Junior, said in a social media post that he was deeply sorry for the death of his neighbor after the attack by a dog his family raised, and offered an apology to her bereaved relatives.

News reports said earlier that the victim, identified only as a 53-year-old businesswoman surnamed Kim who runs Hanilkwan, an upscale Korean cuisine restaurant, was bitten by an French bulldog owned by the Choi family at their apartment complex in Apgujeong-dong, southern Seoul, on Sept. 30. She died of blood poisoning several days later.

“As a member of the family that raised the dog, I feel greatly responsible. I should have been more careful but this tragic incident occurred. I deeply repent and will take measures to ensure such an incident will never recur,” Choi said in the online post.

“My neighbor died of blood poisoning six days after being bitten by my family’s dog by accident,” Choi’s father wrote.

But as to the cause of the victim’s death, the father said, “I’ve been told it is difficult to determine the exact cause of her death, due to the possibility of problems in the process of hospital treatment or secondary infection.”

Choi, who was discharged from mandatory military service in August, is currently appearing in “Revolutionary Love,” a new romantic comedy on cable channel tvN, and Super Junior is preparing to make a comeback in November.