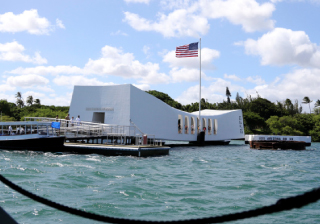 On Dec. 7, 1941, at 7:48 a.m., the Japanese military began its assault on Pearl Harbor, striking the USS West Virginia with a torpedo. Photos from the first day of the attack showed the Japanese bombers had secured a clear view, thanks to favorable weather. All eight American ships anchored at the harbor were attacked with bombs and torpedoes. Four of them sank.

One of them was the USS Arizona, which suffered the highest number of casualties. The 185-meter (607-foot) ship with 30,000 tons of displacement sank 18 minutes into the attack after ammunition located in the front section exploded. Nearly 1,200 officers and crew members were killed, nearly half of the deaths in the attack. The USS Oklahoma, West Virginia and California were salvaged and returned to service, but the Arizona remains underwater.

The United States permanently preserved the site of the attack. In 1962, a memorial was built over the sunken ship, and names of all those killed on the Arizona have been inscribed on the wall. The memorial is visited by more than two million people annually. Last year, Prime Minister Shinzo Abe visited the site, becoming the first sitting Japanese leader to do so.

Without apologizing or repenting for the attack, Abe said, “We must never repeat the horrors of war again,” and “It is my wish that our Japanese children, and President Obama, your American children, and indeed their children and grandchildren, and people all around the world, will continue to remember Pearl Harbor as the symbol of reconciliation.”

Obama said enemies could turn into close allies, and the historic scene represented the power of reconciliation and alliance between the United States and Japan.

Before his Asia tour next month, U.S. President Donald Trump will stop in Hawaii for three days and visit the memorial. The White House said he plans to personally debrief with the U.S. Pacific Command, the first time since Trump ordered the military to prepare options against North Korea.

The Pacific Command constantly updates war plans with the Korea-U.S. Combined Forces Command. The plans include a series of military operations on the peninsula, a pre-emptive attack on the North Korean leadership and cyber warfare. William McKinney, former head of the Northeast Asia Policy Division of the Pacific Command, told me that the Pearl Harbor visit by the commander-in-chief not only shows determination that the United States will not be attacked again but also sends a warning message that all military options are ready.

But it is more than just a message to Pyongyang. Trump’s visit to Pearl Harbor is intended to pressure the leaders of South Korea, Japan and China, with whom he will meet after the visit, to join sanctions against North Korea.

*The author is the Washington correspondent for the JoongAng Ilbo.