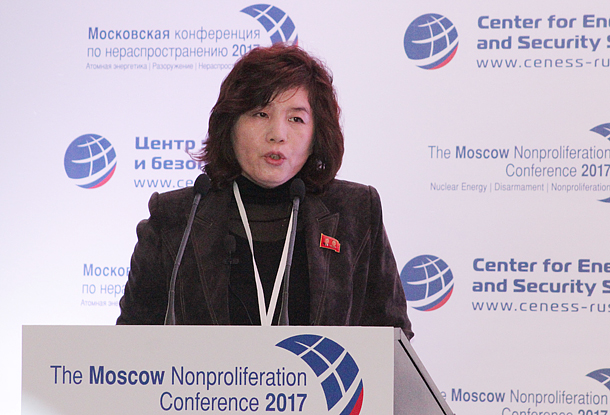 North Korea’s top diplomat for North American affairs called the six-party denuclearization talks “invalid” on Saturday during an international nonproliferation meeting in Moscow, reiterating that her country will not put its nuclear arsenal up for any negotiations.

Choe Son-hui, director general of the North American Department in North Korea’s Foreign Affairs Ministry, who participated in the three-day Moscow Nonproliferation Conference, blamed the United States’ anti-North Korea policy for making it inevitable for the North to develop nuclear weapons, saying doing so was its “only way to protect our national sovereignty.”

Choe continued that North Korea will no longer “hang on” to the joint statement of the fourth round of the six-party talks, signed on Sept. 19, 2005, a key agreement to peacefully denuclearize the Korean Peninsula.

The six-party talks, which involve the two Koreas, United States, China, Japan and Russia, have been stalled since 2008 after North Korea walked out.

The senior diplomat said her country would “solve the problem” bilaterally with the United States, who’s “squeezing [North Korea] to death and trying to topple” its regime.

Shin Beom-chul, a professor of defense and unification issues at the Korea National Diplomatic Academy in Seoul, who was part of the South Korean delegation to the nonproliferation conference, retorted that Seoul and Washington never attacked North Korea and that sanctions were a result of Pyongyang’s provocations.

Choe reportedly was enraged, asking him, “There’s no anti-North Korea policy? What more is needed when all that one has to do is read the newspapers every day?”

A South Korean government source who spoke on the condition of anonymity said Choe and the delegation from Seoul failed to hold any kind of talks on the sidelines of the conference. Lee Sang-hwa, director general for North Korean nuclear affairs in South Korea’s Foreign Affairs Ministry, was said to have briefly met with Choe in a conference hall and exchanged formal greetings but didn’t engage in any lengthy discussions.

The United States didn’t hold any bilateral talks with the North either. Washington was represented by Wendy Sherman, former undersecretary of state; Robert Carlin, former chief of the Northeast Asia Division in the Bureau of Intelligence and Research at the State Department; and Siegfried Hecker, a senior fellow at the Center for International Security and Cooperation of Stanford University, among others.

A local diplomatic source with knowledge of the discussions at the Moscow conference said Choe “went on and on,” blaming the United States’ hawkish policy towards the regime as the chief reason why North Korea was developing nuclear weapons, and said her remarks made it impossible for any deep negotiations to be held among participating countries.

Another South Korean government source who wished not to be named said it appeared North Korea was trying to avoid physical contact with representatives from the South, “as if they wouldn’t talk to us at all until a certain point.” For the North, the conference in Moscow was some sort of a “platform to belch out its stance,” the official added.

Russia was the only country among the six-party nations that held bilateral talks in Moscow last week. After a meeting with Choe, Oleg Burmistrov, Russia’s ambassador at large, told reporters that both sides discussed when Choe would revisit Russia and agreed she definitely would, but have yet to settle on a precise date.

According to Japanese broadcaster NHK, Kenji Kanasugi, director-general of the Japanese Foreign Ministry’s Asian and Oceanian Affairs Bureau, was seen going over to Choe in a conference hall to talk to her, though the subject of their discussion was unknown.

Kanasugi later told reporters that he talked to Choe “several times” in Moscow and “conveyed a message” to her, without explaining further.