Gambling by teens grows thanks to online games

Gambling by teens grows thanks to online games 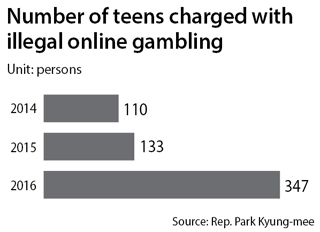 A 16-year-old, who wished to withhold his name, recently called the Korea Center for Gambling Problems for counseling.

He initially saw an advertisement for a gambling website on Facebook and joined out of curiosity. There were plenty of gambling games to enjoy, but as time went on he started to lose more money and felt he could not stop because he had to regain his losses.

“I asked my parents and friends for money using all sorts of excuses,” said the teen. “On the internet, I conned money out of people by selling products I didn’t have, and I’ve even been arrested for that.”

The numbers of teens who seek help for gambling are increasing every year. There were eight who visited the Korea Center for Gambling Problems in 2014, compared to 180 in 2016 and 99 so far this year, as of August.

A total of 347 teenagers were criminally charged for illegal online gambling last year, compared to 110 in 2014, according to data provided by Rep. Park Kyung-mee.

Last September, police in Iksan, North Jeolla, arrested five teenagers for joining an online gambling site and gambling with nearly 300 million won. They earned money from part-time jobs, and even took money from their friends and family. “I tried to stop gambling many times,” said one, “but the thrill of winning was burned into my mind.”

Police in Chuncheon, Gangwon, arrested a teenager in December 2016 who had scammed 7.4 million won from 61 people by reneging on promised payments of exchanges made online, involving items such as baby strollers. And in Busan last April, police arrested teenagers who had committed a similar crime, but made 12 million won doing it. They confessed that they did it to earn money for gambling and other purposes.

Many teens with gambling addiction also experience signs of depression, and may also be struggling academically or be socially alienated. One 18-year-old started gambling in his first year of high school, and said he had got hooked after winning 2 million won in his first game.

“I kept on gambling from the money I’d won and borrowed from friends,” he said, “and now I owe 14 million won.”

Similarly, one 17-year-old had to quit school because of depression. He had joined an illegal ladder game two years ago, and has since accumulated 16 million won in debt.

The number of teenagers being treated for gambling addiction is on the rise. The Health Insurance Review and Assessment Service reported 13 were arrested in 2013, compared to 40 in 2016.

The best solution to this problem is knowledge, according to Rep. Park, who said, “Education regarding gambling addiction prevention needs to be expanded in the schools.”