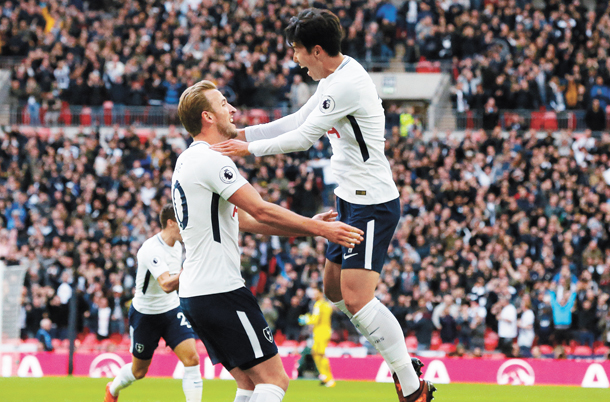 Son Heung-min, right, celebrates with Harry Kane after scoring a goal for Tottenham Hotspur during their English Premier League match against Liverpool at Wembley Stadium in London on Sunday. [AP/YONHAP]

Son Heung-min of Tottenham Hotspur scored his first English Premier League goal of the season during the Spurs’ 4-1 victory over Liverpool at Wembley Stadium in London on Sunday.

With the Spurs leading 1-0, Son scored in the 11th minute off Harry Kane’s assist. Shortly after, in the 16th minute, Son was given another chance to score from Christian Eriksen, but the ball failed to land and bounced off the crossbar.

“I’ve waited a long time to score in the Premier League,” Son said on Spurs TV after the match. “Harry’s pass was unbelievable and incredible, so for me, it was easy to finish it.”

After the match, Son was given a score of 7.83 by WhoScored.com, a football statistics website. It was the second-highest score after Kane, who scored two goals during the game.

In front of a record-breaking crowd of 80,800 on Sunday, the victory against Liverpool has allowed the Spurs to remain undefeated for eight consecutive matches.

In the Premier League, the Spurs are now ranked third with six wins, two draws and one loss, putting them five points behind leader Manchester United.

“Today was a day to enjoy,” head coach Mauricio Pochettino said on the Spurs’ website. “It was an unbelievable performance, I’m very pleased and I’d like to congratulate our players for a fantastic effort.

“I’d like to thank our fans again,” he added. “80,000 fans helping us, and it’s so good because the result will help give us confidence we need for the rest of the season. We start to feel Wembley can be our home.”

Although it was Son’s first Premier League goal of the season, the 25-year-old striker had earlier scored for the Spurs in September during a match against Borussia Dortmund in the UEFA Champions League.

Son’s goal on Sunday has allowed him to pass another record of Park’s: most Premier League goals by an Asian player.

Aside from the European records, Son also scored a goal for the Korean national football team, his first in a year, during a friendly match against Morocco on Oct. 13.

In his three seasons with the English Premier League, Son has already scored 19 goals. He is set to surpass football legend Cha Bum-kun in record number of goals scored by a Korean player in their club’s league matches.

Out of Son’s 21 goals throughout the last season, 14 of them were scored in Premier League matches. Since Cha scored 17 goals in Bundesliga matches during the 1985-86 season while playing for Bayer Leverkusen, if Son exceeds 17 this EPL season, he will set another record.

The Spurs will next play West Ham United in an English League Cup match at Wembley Stadium in London on Thursday.