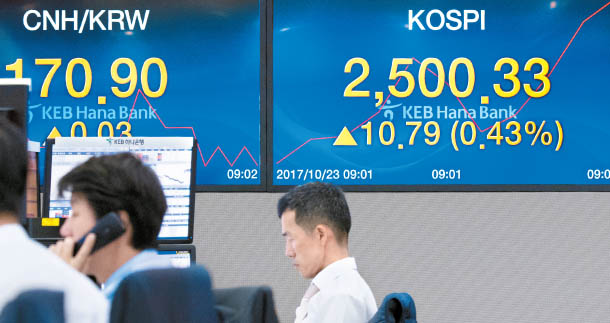 The benchmark Kospi reached a fresh milestone on Monday, topping the 2,500 mark in intraday trading for the first time in history.

The Kospi hit an all-time high of 2,500.3 less than 3 minutes after the opening as investors bet on sound earnings in the third quarter and a cheerful investment sentiment from record high market indexes in the United States.

U.S. stock indices including the Dow, the S&P 500 and the Nasdaq hit new closing highs last Friday after the U.S. Senate passed a budget resolution containing tax cuts, a move that some analysts believe will be needed to maintain the bullish market.

Taking a cue from U.S. markets, the Kospi ended at 2,490.05, another record close. The rally follows the previous week in which the main bourse pulled off two record closes.

“But it was also helped by the well-performing U.S. markets,” he said.

The main driver for corporate earnings was Samsung Electronics, a market bellwether that forecast another record-breaking performance for the third quarter.

Aside from the corporate sector, Korea’s economy is doing well with robust exports and improved consumption.

The Bank of Korea made an upward revision of its forecast for the economy’s growth in 2017 last week, raising the rate to 3 percent from a previous 2.8 percent.

Against this backdrop, some analysts have bold predictions for the Kospi through next year.

Gwak Hyun-soo, an analyst at Shinhan Investment, said that the market could reach 2,800 in the first half of next year based on trends in the U.S. and Korea stock markets.

“The Kospi will rise in a steady manner through the first half of next year,” the analyst said, “The pace of the increase may be adjusted but until the end of this year, investors are advised to expand their proportion of Kospi stocks.”

Others advised a more cautious approach because of potential headwinds from interest rate hikes and looming geopolitical tensions.

“As the U.S. Fed is expected to raise interest rates at the end of this year and next year, the hike could lead to a slowdown in major economic indicators,” said Chang.