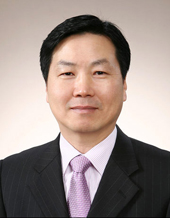 President Moon Jae-in on Monday named Hong Jong-haak, former lawmaker of the Democratic Party and a liberal economist, as the head of a new ministry to support small companies and startups.

According to Presidential Spokesman Park Soo-hyun, Hong, an economist-turned-politician, was nominated as the minister of SMEs (small- and medium-sized businesses) and Startups. The ministry, created in June, was part of Moon’s ambition to create jobs by improving support for small companies.

Hong, a former professor of economics at Gachon University, served as a proportional representative for the Democratic Party from 2012 until 2016. He was also a key member of Moon’s presidential campaign.

He was also a policy director of the civic group Citizens’ Coalition for Economic Justice. The 58-year-old minister nominee is a native of Incheon and a graduate of Yonsei University. He earned a doctoral degree in economics at the University of California, San Diego.

“He is an economic specialist armed with theories and field experience,” Park said. “He is the best person to create a healthy economic ecosystem centered on small and medium companies and start-ups based on his understanding of the Moon administration’s policies.”

Park said Hong will transform the economic structure, which has long favored conglomerates, and create high-quality jobs by establishing a fair trade order and boosting cooperation between conglomerates and small companies.

If Hong passes a National Assembly confirmation hearing and is formally appointed, he will fill the final vacancy in Moon’s inaugural cabinet. Moon took office in May without a transition period following a snap election victory.

Moon’s initial nominee for the post, Park Seong-jin, withdrew in September after the National Assembly, including the ruling Democratic Party, refused to confirm him due to his lack of qualifications and skills. The botched nomination forced the Blue House to issue a public apology and a pledge to improve the Blue House’s vetting system.

Hong is the seventh politician to be named to Moon’s cabinet. As of now, five of Moon’s ministers are incumbent lawmakers and one is a former lawmaker. Lawmakers are relatively easy to get confirmed, and a presidential official admitted that politics was also taken into account.