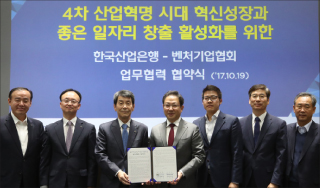 A man in his 40s who works for an IT subsidiary of a conglomerate is anxious. The company is making a profit, but it claims to be struggling. There are rumors of restructuring and reshuffles. He has a child in elementary school, and having purchased a home with a mortgage loan, he would have trouble supporting his family if he can no longer work for the company. “It’s been several years already. I am worried if the company will exist in ten years.”

Vice Chairman and CEO of Samsung Electronics Kwon Oh-hyun announced his resignation on Oct. 13 and said that the company was in an unprecedented crisis. When you look at the performance, Samsung Electronics looks just fine. Thanks to the latest boom in the semiconductor market, the quarterly operation profit was over 14 trillion won ($12.4 billion), which is a record high. The stock price went up by 50 percent this year.

But he mentioned a crisis because of the future, not the present. Kwon said, “Fortunately, the company showed the highest performance in history, only thanks to the decisions and investment made in the past. But it cannot afford to predict the trend of the future and seek new growth engines.”

Companies want sustainable business. So the managers are looking at four, five years in the future, as the next growth engine determines the success and failure of the company in the future. Amazon founder Jeff Bezos said, “When somebody . . . congratulates Amazon on a good quarter . . . I say thank you. But what I’m thinking to myself is . . . those quarterly results were actually pretty much fully baked about 3 years ago.” Now he advises executives to do business looking five to seven years into the future.

It is not just Samsung Electronics or Amazon that needs a long-term perspective. Small business owners also need to consider the future. But the reality is not easy. The domestic and international markets are rapidly changing in the fourth industrial revolution era. It is hard to predict which industries and businesses will survive 10 years down the line. More small businesses are failing, leaving the owners in debt.

Some claim that an economic crisis is imminent, but Blue House Senior Secretary for Economic Affairs Hong Jang-pyo does not think the possibility of an economic crisis is likely. Exports have been on the rise for 11 months straight, and the Kospi is at a record high. Real and financial markets are stable. As someone overseeing economic policy, he discouraged the unnecessary sense of crisis from spreading. In order to clear the uncertainty, he also needs to present a big picture on economic vision.

*The author is head of the Innovation Lab at the JoongAng Ilbo.