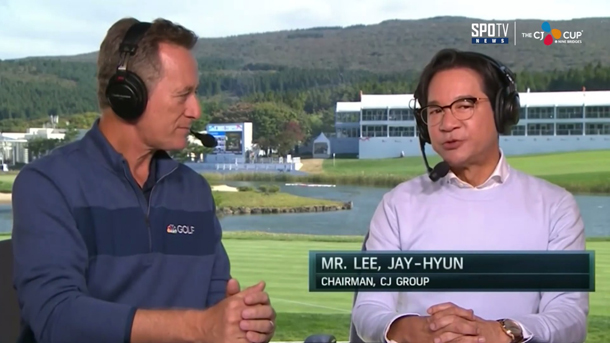 CJ Group Chair Lee Jay-hyun made an appearance on NBC’s Golf Channel during The CJ Cup @ Nine Bridges on Sunday, reaffirming the company’s goal as a global “lifestyle” company.

“In the old days, CJ was just a sugar refinery. Since I took it over I’ve been changing CJ into a global lifestyle company with diverse businesses of food services, bioscience, logistics, and in particular, entertainment and media,” Lee explained when NBC golf commentator Rich Lerner asked about the conglomerate.

On the group’s future plans, Lee mentioned that CJ was a “household name” in Korea and said it is “pushing our global reach and K-culture even further to be an integrated part of everyday life for customers all around the world.”

The CJ Cup, which is the first PGA tour hosted by a Korean company, is the biggest event for the group following Lee’s release from prison last summer. The tycoon was incarcerated in December 2015 for embezzlement and tax evasion.

Lee’s enthusiasm for golf has been cited by company sources as one of the reasons CJ hosted the event. In fact, the chairman stayed throughout the event which took place at the group’s Nine Bridges golf course on Jeju Island from Thursday, checking details around the venue.

His appearance on NBC and on the introductory video for the event also hinted at his passion for the sport, as media appearances would typically be handled by a high-level executive rather than the head of the company.

The CJ Cup attracted 35,000 visitors to Jeju Island, the company said Monday. The event was also played live in 227 countries, through which the company hoped to increase global awareness of CJ and Korea’s culture and sports.

Under the contract CJ signed with the PGA tour last year, the Korean conglomerate will hold The CJ Cup for the next nine years.