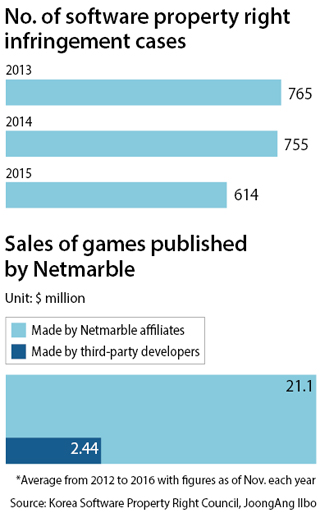 A legal dispute involving intellectual property rights between a major publisher and a smaller developer has divided the Korean gaming industry.

While a court recently ruled in favor of the publisher, smaller game makers continue to complain that infringement and exploitation in the industry are on the rise.

In November 2016, iPeoples, a small game maker, filed a lawsuit against Netmarble Games, one of the largest game publishers in Korea.

The lawsuit was against Netmarble’s flagship mobile game Everyone’s Marble.

iPeoples claimed that Netmarble copied certain elements of the game from its mobile game, Blue Marble. iPeoples launched Blue Marble in 2008 by acquiring the exclusive rights to the intellectual property of a popular Korean board game with the same name, made by Korean board game publisher Siyatsa in 1982.

Everyone’s Marble is one of the most popular games made by Netmarble to date, with its accumulated sales exceeding 1 trillion won ($885 million), making Netmarble the second largest game publisher in Korea.

After litigation, the local court ruled in favor of Netmarble.

Last month, a local court ruled that the similarity between Everyone’s Marble and Blue Marble was not significant enough to determine that Netmarble had infringed on the intellectual property right that iPeoples signed with Siyatsa. iPeoples said it would appeal.

After the ruling by the court, other small game makers came forward, saying the industry is unfavorable toward smaller companies.

“If a large publisher [creates a game using an idea by smaller developers and] decides to yield its market power to dominate the market, [smaller developers] cannot even think about competing [against the large publisher],” said the chief executive of a small game maker, under anonymity. “The only way out of that market dynamic is utilizing [exclusive] intellectual property but domestic copyrights law is quite lenient.”

Under the law, if a court determines that the level of similarity between content is less than 70 percent, it is not considered a violation of intellectual property rights, according to industry insiders. Because of the conservative nature of the current legislation, smaller companies are reluctant to commit several million won to lawsuits even when they think their intellectual property rights have been violated by larger companies.

The court says the domestic laws on intellectual property rights must not deal a blow to market competition.

“The exclusive rights of the holder of intellectual property and free competition must be well balanced,” said the court in the recent ruling. “[The court] must be cautious when it comes to legal interpretation that could limit competition.”

Other than intellectual property rights, some local game makers say that the dynamic of the local gaming industry often leads to major publishers such as Netmarble exploiting smaller developers.

Asides from developing its own content, Netmarble also publishes games made by third-party developers. In the process of publishing, however, smaller makers, who are looking to utilize Netmarble’s brand power, claim that the publisher fails to provide them with fair compensation.

Between 2012 and November of last year, Netmarble published 27 games out of the 140 that it signed publishing contracts for with local developers.

The average sales of those games by outside developers during the period stood at around $2.44 million, whereas Netmarble and its subsidiaries’ sales were approximately 10 times bigger at $21.1 million.

Of the 27 games published by Netmarble and made by outside developers, 22 have since been shut down.

“The government has to implement a system that monitors any unfair contracts [between large and small companies],” said a spokesperson from a game developer that worked with Netmarble in the past.

Netmarble, however, refuted such claims, saying it has not stolen ideas from other developers nor has it violated any related law.