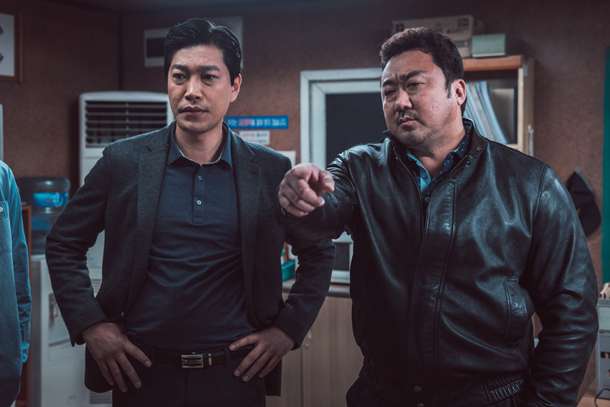 Neither the disaster movie “Geostorm” nor the period epic “Man of Will” were able to pull “The Outlaws” down from the top of the weekend box office during their debut weekend.

In its third weekend, “The Outlaws,” starring Ma Dong-seok and Yoon Kye-sang, managed to keep its top spot at Korea’s weekend box office for the second weekend straight, selling 787,000 tickets at 994 screens, and bringing the film’s total ticket sales to five million as of Monday.

The movie, about a merciless boss (Yoon) from a Korean-Chinese crime organization headquartered in Harbin, northeast China, who is willing to commit any crime for money, and a local police detective (Ma) who tries to catch the ruthless criminal, accounted for 40.6 percent of the weekend’s ticket sales from Friday to Sunday.

Coming in at second was “Geostorm.” Directed by “Independence Day” producer Dean Devlin (2016) and starring Gerard Butler, Abbie Cornish and Ed Harris, the film is set in the near future where climate-controlling satellites go haywire and cause a huge storm, until two brothers save the day.

The movie sold 605,000 tickets at 854 screens over the three days in its debut weekend. Since the film’s release on Thursday, it has sold a total of 695,000 admissions.

“Man of Will,” written and directed by Lee Won-tae and starring Cho Jin-woong, landed at third after selling 201,000 tickets. The movie, also released on Thursday, has sold a total of 260,000 admissions so far.

The period epic depicts the early years of Kim Koo, a leading Korean independence activist. Kim, also known by his pen name, Baekbeom, was the last head of Korea’s provisional government in Shanghai during Japan’s colonial occupation (1910-45). Instead of shedding light on the shining moments of the independence activist’s life, the film is the coming-of-age story of an ordinary young man.

Another period drama, “The Fortress,” starring high profile actors Lee Byung-hun and Kim Yun-seok, was pushed down to the fourth spot in its third weekend.

Finally, “Kingsman: The Golden Circle” managed to round out the top five. The sequel has sold a total of 4.9 million admissions in the four weeks it has been in local theaters.