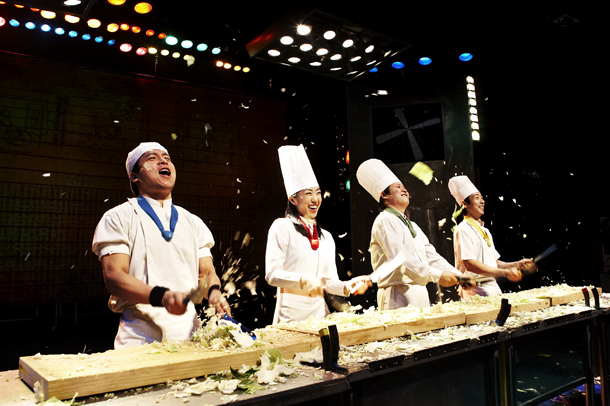 Actors for “Cookin’ Nanta” chop cabbage as they create traditional Korean rhythms by beating their knives on the wooden boards during the show. [PMC PRODUCTION]

A non-verbal performance titled “Nanta,” better known as “Cookin’ Nanta” for foreign audiences, has been a cash cow for PMC Production, the Korean production company that created the show in 1997. Celebrating its 20th anniversary this month, the show, which combines the traditional rhythms of samulnori (Korean traditional percussion) with a fast-paced kitchen percussion show combining comedy and rhythm, has been enjoyed by more than 12 million people in more than 300 cities around the world.

From top to bottom: PMC Production’s “Cookin’ Nanta” made its Broadway debut in 2004 at the New Victory Theater; people look at the show’s posters at the Edinburgh’s Fringe Festival in 1999; actors use real vegetables and fire in the show; actor Ryu Seung-ryong performs during the show’s 20-year anniversary event, recalling when he was part of “Cookin’ Nanta”; actor and theater producer Song Seung-whan, the show creator, says it hurts to have to close its theater in Chungjeongno, central Seoul. [PMC PRODUCTION]

However, the 20-year anniversary has not been a celebration for the production company, as its exclusive theater in Chungjeongno, central Seoul, is slated to close its doors in December due to the sudden drop in audience numbers, the majority of whom were Chinese tourists. Following China’s boycott against Korean culture to express their discontent at Korea’s plan to install the U.S. Terminal High Altitude Area Defense (Thaad) antimissile system that began early this year, the show saw a significant drop in ticket sales.

“I didn’t know how to celebrate the 20th anniversary as we are faced with such a grim situation of shutting down this exclusive theater,” said actor Song Seung-whan, the producer of the show, during its anniversary event held at the Chungjeongno Theater last week. “I think we are going through growing pains, since Nanta is now 20 years old. It’s time for us to remind ourselves of the time when we first launched the show with no audience in 1997, and try to come up with new strategies to sustain this show generation after generation.”

According to the production company, the majority of the audiences at its Chungjeongno Theater were Chinese tourists visiting Seoul on tour packages that included a stop to the show. But audiences began decreasing gradually since last year and plummeted to almost zero this year, leaving the company with no choice but to make some sacrifices.

Acknowledging that the show has been heavily dependent on Chinese tourists, Song said they would try to come up with new strategies as if they were starting a new show.

“If we can’t fill the seats of the theaters in Korea with Chinese tourists, we believe it’s time for us to focus more on establishing exclusive theaters overseas,” said Song.

PMC Production operates five theaters dedicated to “Cookin’ Nanta” - three in Seoul, one in Jeju and one in Bangkok, Thailand.

“More than 90 percent of the seats get filled at the Nanta theater in Bangkok,” Song added. “We are attempting to establish more theaters abroad in tourist-rich cities like in Honolulu in Hawaii and Pattaya in Thailand, for example, so that Nanta can be enjoyed by more global audiences.”

Song also emphasized the need to upgrade and redevelop the show’s story line to suit the tastes of modern theatergoers. The current plot follows chefs of a restaurant preparing for a traditional Korean wedding banquet.

Back in October 1997, with only a few days left until the premiere of the show at the Hoam Art Hall in central Seoul, not a single ticket was sold.

“People simply thought it will be boring to see a play using samulnori,” recalled Song. “I had to give out freebie tickets to people as this show requires interaction between the actors on stage and the audience. Rather than just giving out tickets to anyone, I invited those who were interested in theater as well as the press. The show quickly became viral through word-of-mouth and many complained that the tickets sold out too quickly. I’ve achieved so many dreams through this show.”

Song said that as a producer, it had been his dream to take his show to Broadway. “Cookin’ Nanta” helped Song achieve that dream in 2004, when the show made its off-Broadway debut at New York’s New Victory Theater. It was the first Korean-made show to be invited to New York.

According to Song, foreign producers who have seen the show commented that this show’s success is based on the Korean elements included in the show. If bringing together the traditional rhythms of samulnori and a witty story has been the secret ingredient in the success of the show, Song says he’s confident that the show can last longer than 20 years.

“There are several theaters in England, for example, that play one performance exclusively for more than 60 years. That is where we want to arrive,” Song said.