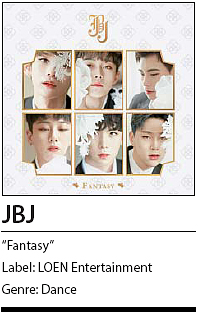 How does one react when someone they have been hoping notices them finally makes eye contact for the first time?

Fans of JBJ, a six-member boy group made up of contestants from the second season of Mnet’s hit show “Produce 101,” are feeling pretty visible these days with the release of their debut, “Fantasy.” Accordingly, the album’s six tracks all fall under the theme of “dreams come true.”

Two members, Kim Sang-gyun and Kwon Hyun-bin, wrote the lyrics to the album’s title track - a driving, bass-heavy artistic statement for the rookie group. The opening track, “J.B.J. (Intro)” reveals the meaning behind the group’s name and expresses gratitude towards their fans, who have feverishly followed the members since they first appeared on “Produce 101” this summer.

“Say My Name” is another highlight, especially for the group’s talented rappers. “From Today” and “As If In a Dream” are cheerful additions to the project and will surely delight fans.