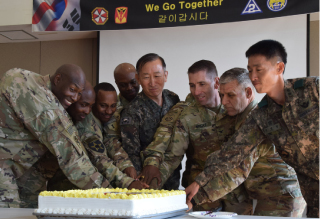 A ceremony is held in Seongju, North Gyeongsang for the unit in charge of the Thaad battery, the 35th ADA Brigade in South Korea. [YONHAP]

The U.S. Forces Korea (USFK) said Sunday it has officially set up the unit charged with operating the controversial advanced missile defense system deployed in the country.

A ceremony was held in the southeastern county of Seongju on Thursday to transfer the Delta Battery of the 11th Air Defense Artillery (ADA) Brigade in Fort Bliss, Texas, to the 35th ADA Brigade in South Korea, official sources said.

The Terminal High Altitude Area Defense (Thaad) battery, which has missile launchers, command and control facilities and a powerful radar, was first deployed in April as part of the Global Response Force amid growing tensions on the Korean Peninsula. At the time there were two interceptor launchers stationed in the rural county. Four more were added last month.

In September, South Korea announced that the deployment of a Thaad battery in the county had been completed in a “tentative” step to counter threats from North Korea. The battery has been operational, but the military unit operating it has not fully been in place.

South Korea decided to deploy the U.S. missile defense shield - despite fierce protest from local residents and civic groups - as a countermeasure to North Korea’s repeated nuclear and missile provocations.

In addition, the USFK and South Korea’s military said they will create a joint security force to guard the Seongju base. The security contingent will be made up of troops from South Korea’s 201st Special Assault Brigade under the 2nd Operation Command and USFK’s special combined security force.