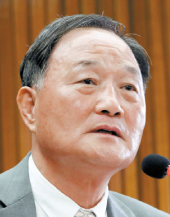 Kim, who leads the Korea Football Association (KFA)’s technical committee, was called to the witness stand for the National Assembly’s Education, Culture, Sports, and Tourism Committee audit session at Chungnam National University in Daejeon and apologized for the Hiddink controversy that has shaken the football community here.

“I was at the center of the controversy, and I’m very sorry,” he said. “The national team qualified for the World Cup with difficulty and we’ll do our best to meet fans’ expectations.”

Kim, also one of the KFA vice presidents, has been locked in a petty war of words with Roh Je-ho, secretary-general of the nonprofit Guus Hiddink Foundation in Seoul, who claimed the KFA ignored Hiddink’s offer to coach the men’s national team four months ago.

Roh said he sent a text message to Kim on June 19 about Hiddink’s national team comeback after meeting the former Chelsea manager on June 16, one day after Uli Stielike was fired from his national team coaching job.

The KFA, however, later appointed Shin Tae-yong as the new national team boss.

Under Shin, Korea managed to qualify for the 2018 FIFA World Cup last month, but some fans who were disappointed by the national team’s performance and had fond memories of Korea’s Hiddink-coached run to the semifinals in 2002 have been calling on the KFA to bring back the Dutchman.

Kim, named the technical committee chief on June 26, repeated his earlier explanation that he had to downplay Roh’s message because it was sent via a mobile messenger.

Kim said the Hiddink issue should not be discussed again since the 70-year-old has already confirmed that he won’t take an official position on the national team. He has offered to help the Taeguk Warriors in some other ways at the World Cup in Russia.

KFA officials and Hiddink met in Cannes, France, earlier this month and clarified the situation.

“We’re done with Hiddink,” Kim said. “Hiddink said he can’t take any position [with us] because he has to work as a commentator.”

Kim also emphasized that current head coach Shin will lead Korea at the 2018 World Cup and the KFA will give its utmost support to the national team.