The buck stops where?

The buck stops where? 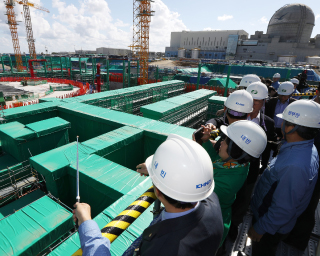 Lawmakers of the National Assembly’s Trade, Industry, Energy, SMEs and Startups Committee visit the construction site of the Shin Kori 5 and 6 reactors in Ulsan on Friday. [YONHAP]

Im Jong-seok, the presidential chief of staff, wrote on his Facebook page Friday after a panel of members of the general public recommended the government finish the construction of the Shin Kori 5 and 6 reactors. Construction had been halted in July as a part of the government’s policy to wean Korea off of nuclear power. “The light of democracy that fired up the streets in June 1987 and lit up the country during last winter has warmed us in another form through the panel activity,” Im exclaimed. It was President Moon Jae-in who had the idea of putting the decision in the hands of the ordinary man through a new kind of democratic procedure, he wrote.

Im may have wanted to associate the 1987 democracy movement with this new kind of democratic process to decide a controversial change in national policy, and, of course, to give credit to Moon. But what about other voices about the controversial issue? The government has come under fire for attempting to avoid accountability for a controversial policy decision by hiding behind the panel. Moon, the president, will have to answer if any questions of breaching the Constitution arise. Im, therefore, was careless by naming his boss publicly as the person fully credited for the idea of creating the panel and giving it the power to make a decision for the government.

In his euphoria, Im forgot to apologize for the social and economic price exacted by the hasty decision to suspend construction of the Shin Kori 5 and 6 reactors. Stopping construction that was already 30 percent complete was reckless in the first place. Reversing a major infrastructure project just because a new administration didn’t agree with it was wrong. The new government jeopardized the regional economy, the entire industry — builders as well as parts suppliers — jobs of construction workers and engineers, and the prospect of exports of one of Korea’s most advanced technologies. Stopping construction work over the last 100 days wasted 100 billion won ($88.6 million).

Even with a 19 percentage point gap between the panel’s votes supporting and rejecting resumption of construction, the presidential office and government reiterated that its decision would not affect its long-term phase-out of nuclear power. They are making the same paradoxical argument as before when they claimed the country could still export reactor technology even after it is no longer in use in Korea.

According to the Prime Ministerial Act issued on July 17, the panel was formed to come to a conclusion about the fate of Shin Kori 5 and 6 alone. Its sole mission was to decide whether construction should go on or be permanently stopped. Yet the government has been highlighting another poll by the panel that showed more people voting in support of reduction of reactors, an issue on which the panel had no legitimate say.

Under the regulation, the panel should have stuck to questions about Shin Kori 5 and 6. Yet it was asked about long-term reactor policy. The survey found more — 53.2 percent — favoring reduction of nuclear power reactions compared to the 45.2 percent happy with the status quo or additional reactors. There was a gap of about 8 percentage points, slightly beyond the margin of error of 7.2 percentage points.

Yet the commission that ran the panel said the share of voters in favor of reduction of reactors had been “significantly” higher. The question was theoretical in the first place. It was like asking if you favor war or peace. It was designed to sway more answers towards reductions.

The government plans to push ahead with its phasing-out of nuclear power based on the poll finding of 53.2 percent favoring the idea. This is also wrong as a reduction in reactors and ending nuclear power are entirely different matters. The former proposes to reduce the share of reactors against energy sources, while the latter aspires to remove reactors from the country. In the questionnaire, only 13.3 percent supported the nuclear phase-out policy. Kim Ji-hyung, chairman of the commission, left out this part during the press conference. The figure was only in the press material.

Let’s go back to Im. The role of the chief of staff is to defend his president. He should have left the eulogy about democratic achievement to someone else and made a cool judgment based on facts. Authorities must study the findings more thoroughly and clearly understand the public’s view without bending facts to fit their policies.