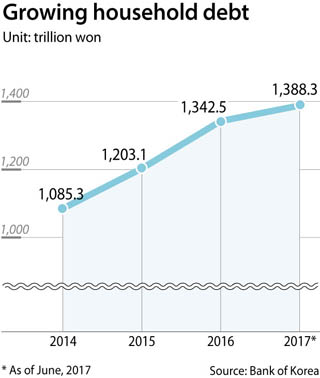 The Finance Ministry and the Financial Services Commission, however, fine-tuned the curbs to exclude low-income borrowers, people under 40 and newlywed couples. The authorities also plan to expand a debt relief program.

“The country’s debt is growing by double digits,” said Kim Dong-yeon, minister of strategy and finance. “The government aims to lower the growth pace to around 8 percent [through these measures].”

The main tightening measure is the introduction of a new debt-to-income-ratio, which dictates how much people are allowed to borrow depending on their incomes.

Currently, when a borrower who already holds one mortgage applies for a new loan to buy a house, banks recognize the principal of the new mortgage and the interest payments on existing ones as total debt.

But with the new standard due to come into effect in January, the principal of the existing loans will also be included if the borrower has more than two pending mortgages.

But the new standard will only be applied to loans on properties in what the government has labeled overly speculative areas.

Following a change in regulations in August, DTI ratios of 30 percent to 50 percent are used on those regions, down from 40 to 70 percent based on the types of property and loan maturity dates. The lower the rate, the tougher the standard.

In assessing income levels for mortgages, banks will track two years of salary records, up from the current one year.

But newlyweds and people under 40 who don’t own any property will be exempted from the stricter standards.

The measures also include the adoption of a debt service ratio, a stricter lending standard than the DTI.

It is tougher since the ratio includes other kinds of loans than mortgages.

Authorities originally planned to institute the tighter measures in 2019 but pushed them forward.

But what debt service ratio is used is up to banks.

The government also promised support for marginalized borrowers who find it hard to repay relatively small amount of debt.

The ministry and the financial regulatory agency vowed to extend a debt relief program proposed by the Moon Jae-in government.

The proposed program will buy back debt held by private lending companies that nears the statute of limitations to recover, on top of an earlier plan to forgive debts of less than 10 million won ($8,860) in the National Happiness Fund overdue for 10 years.

The National Happiness Fund is a state-run fund established by the Park Geun-hye administration to help low-income people write off debt.

For borrowers who lost a job or had a business fail, the government will delay repayments of debt principal by up to three years.

Accumulated household debt in Korea has swelled over the years.

The Bank of Korea said that it hit 1,388 trillion won in the second quarter. The figure continued to rise, surpassing the 1,400 trillion won as of the end of September, albeit at a slower pace.

With interest rate hikes expected both at home and in the United States, the cost of debt servicing will increase, one of the reasons the government tightened regulations.