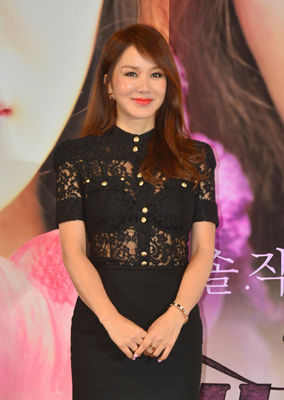 Singer-actress Uhm Jung-hwa will release an album next month, according to a music production company Tuesday.

The five-track record will be the second half of “The Cloud Dream of the Nine,” Uhm’s 10th full-length album, Mystic Entertainment, the album’s production company said. The first half, a four-track record, was released in December 2016.

The new album will feature contributions from fellow ‘90s idol stars Lee Hyo-ri and Jung Ryeo-won. The 48-year-old songstress finished shooting a music video for a song off of the album last week, according to Mystic.

Uhm debuted as a singer in 1993 with her first single “Pupil” and continued to release a string of hits over the years, including “A Rose of Betrayal,” “Poison,” “Invitation” and “I Don’t Know.” She has also maintained a high profile in acting, appearing in numerous movies and television dramas.