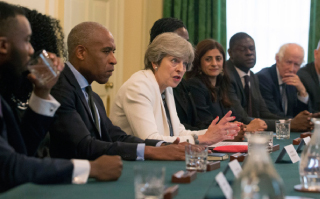 On Oct. 15, Kim, a Korean national studying in the United Kingdom, was hit in the head with a bottle on the streets of Brighton at night. The hate crime occurred in the alley with no surveillance camera, but a video recording of the scene was shared on Facebook.

I wondered why Kim did not fight back, as he was quite large. In a phone interview, he said, “I could have overpowered him, but when it becomes a fight, I could get deported as a foreigner.” After Brexit, foreigners feel increasingly unwelcome, and he thought the sentiment could affect his status.

Kim also said that he knew someone was recording the scene with a phone. The video was recorded by a British passerby who was at a nearby pub. It is shocking that a group of adults gathered in front of the pub did not intervene, but encouraged the fight. After one of the teenagers struck his face with a bottle, they realized the violence was serious and sent the video to Kim.

Before targeting him, the teenagers hit a Chinese student sitting at a bus stop and picked a fight with a Japanese owner of a Japanese restaurant on the same street. But the incidents were not reported by local media. The British authorities are gathering information and released a vague description: “Caucasian teenage man of slim build and brown hair, wearing blue shirt, dark coat, grey pants and dark shoes.”

If there were no video, British law enforcement may not have bothered to investigate the heinous crime that Kim and his Japanese friend, also a student, suffered because of their race.

A Brighton local opened a funding site to raise money for Kim’s medical bills. Social media is full of posts denouncing the crime. British people who saw the video tipped off the police, leading to the arrest of the suspect.

Kim said, “I’ve learned from the incident that hostile people like the assaulter are few in number, and I am grateful for the help from the majority of British people.” But hate crimes inspired by racial discrimination increased by 27 percent in the United Kingdom compared to the same period last year. Foreign students say they often run into young people who make derogatory remarks against Chinese and other ethnic minorities on the street.

Western society will end up becoming a deeply insensitive community if it does not fight to defend the tradition of tolerance and respect through education.