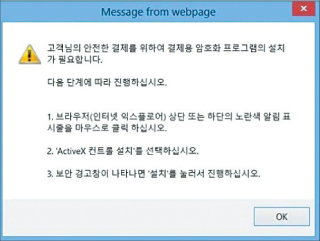 A pop-up window asks an internet user to download the ActiveX system. [YONHAP]

Despite the government’s efforts to reduce dependence on ActiveX, a notorious software framework developed by Microsoft, the system is still active on nearly half of Korea’s top 100 websites.

Rep. Koh Yong-jin of the ruling Democratic Party of Korea, who is on the National Assembly’s Science and ICT committee, announced Tuesday that 44 out of nation’s 100 most frequently used websites are using 358 ActiveX-embedded programs based on data accumulated by the Ministry of Science and ICT.

ActiveX has been used in Korea as a mandatory security system for all online and electronic financial exchanges due to security laws adopted 18 years ago. As ActiveX only runs on Microsoft Explorer, other browsers such as Google’s Chrome and Apple’s Safari are denied access.

Korea’s heavy dependence on ActiveX makes it more difficult for foreigners to use Korean websites or start online businesses here.

In early 2014, the Park Geun-hye administration decided to lift the mandatory use of ActiveX and ordered institutions to find alternative security systems. But Koh’s report shows a substantial number of major Korean websites continue to use ActiveX.

According to ministry data, local game service Hangame used the most number of ActiveX-embedded programs, 22. Online cloud service provider Webhard followed with 15. Major banks such as NH Nonghyup Bank and Shinhan Bank came in third with 12 programs and KB Kookmin Bank came in fourth with 11.

Internet portals like Naver and Daum and employment portals including Saramin, Job Korea, and Incruit used at least one ActiveX-embedded program on their websites. Major local media agencies used ActiveX as well.

ActiveX was used mostly for downloading multimedia content such as video and music files and making online transactions. Despite the original justification for its use, only 6.9 percent of the 358 ActiveX-embedded programs were intended for web security.

“Eliminating ActiveX from the web is one of important information technology-related goals of the Moon Jae-in administration,” Koh said. “As even the maker of the ActiveX system, Microsoft, suggested we stop using the software , we should put efforts into eliminating ActiveX as well as other plug-ins.”