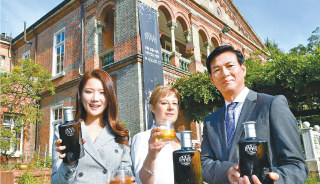 Diageo Korea released a low-alcohol whiskey for the local market on Tuesday in response to growing consumer preference for weaker drinks.

The Korean affiliate of the British liquor maker launched W Signature 12, a blended whiskey with an alcohol content of 35 percent. The company said the whiskey has been blended by world-renowned masters Douglas Murray, Craig Wallace and Caroline Martin using whiskeys that have matured in Scotland for at least 12 years.

“The value of whiskey made out of years of maturation is unquestionable,” Cho Kil-soo, CEO of Diageo Korea, said at a press event Tuesday at the British Embassy. “I believe W Signature 12 blended by global masters will become a safe choice for our consumers.”

On top of the deep tint coming from years of aging, W Signature 12 is topped with what Murray describes as “triple smoothness,” offering sweet flavor and mild texture.

Diageo Korea said it is targeting the “late millennial” generation in their mid-30s and 40s with its latest whiskey product. Hyun Bin, the 35-year-old heartthrob best known for his role in the television drama “Secret Garden,” will be the brand ambassador, and the bottle design, with shades of deep gray and curvy lines, reflects a more youthful vibe.

W Signature 12, which is categorized as a spirit according to European Spirit Drink Regulations, will be sold in Korea at 26,026 won ($23) for a 450-milliliter (15-ounce) bottle.