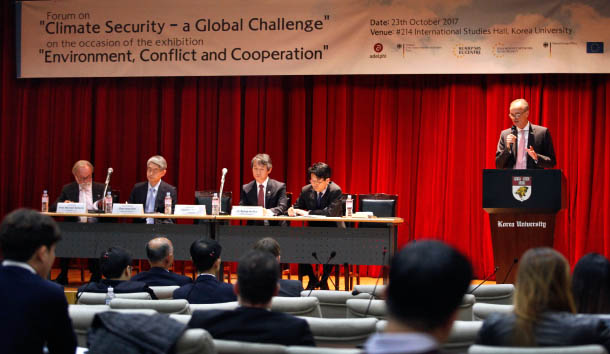 German Ambassador to Korea Stephan Auer speaks at the “Climate Security - a Global Challenge” forum at Korea University in central Seoul on Monday, organized and participated by Adelphi, the German Embassy in Seoul, Korea University, KU-KIEP-SBS EU Centre and the EU Delegation to Korea. [PARK SANG-MOON]

“The supreme task of diplomats is to contribute to peace and security,” said Auer. “On the Korean Peninsula in the current situation, you are well aware how difficult this task comes along. And you might tend to say, ‘We have to prevent another war on Korean soil, any military action between North Korea and the United States of America, by all peaceful means. However, there is no additional time or capacity to engage in climate security.’”

He added, “The problem is, we cannot wait with climate diplomacy until the North Korean case has been solved. Climate security is as well an urgent matter. If you look around the globe, for some nations, not only small-island states, climate security is also a matter of war or peace, a matter of sheer existence.”

President Moon Jae-in has, since he was a presidential candidate, vowed to wean the country off nuclear and coal energy for safety and environmental reasons.

He added, “Five of them will utilize the latest technology to ensure lowest emissions possible and the rest will be built into LNG power plants.”

The experts gathered at the forum “Climate Security - a Global Challenge” said there was some optimism in the air regarding the international community’s effort to combat climate change.

“I was comforted two months ago when Barack Obama was in Seoul for the Asian Leadership Conference and he said that one good thing that happened was that the idea [of battling climate change] is already part of the society,” said Reiterer. “Resilience, education and awareness-raising, these are the most important and I think we are making progress here.”

“In the past, China was reluctant to take action on climate change, but now they are joining hands with European countries and with the rest of the international community,” said Foreign Ministry’s Ambassador for Climate Change Kim Chan-woo. “So there is not so much to worry about in terms of leadership deficiency.”