In Korean sports reporting, the phrase “national football team” is automatically understood to mean the men’s team, while the women’s team is fated to its gender descriptor. 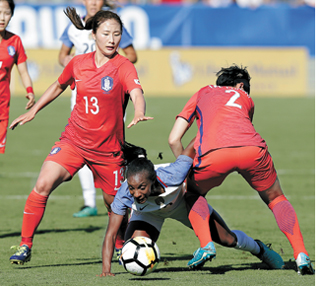 The Korean women’s football team during a friendly match against the United States. [AP/YONHAP]

The female squad has made great strides, advancing to the round of 16 in the 2015 FIFA World Cup in Canada and most recently earning a spot in the 2018 Women’s Asia Cup by finishing first in Group B, but their successes are quickly forgotten. Since women’s football started a lot later than men’s football in Korea and the number of female football players is much smaller, the publicity gap is unavoidable.

About 1,600 women are registered as football players as of 2017, but women’s clubs don’t receive as much support from the government. The WK League, Korea’s top football league for women, is in crisis after Icheon Daekyo announced in August that it would dissolve.

The dismal status of women’s football in Korea might be one reason why the national team is doing its best to prove itself in international events like the 2016 Rio Olympics and the upcoming France World Cup in 2019. Gaining recognition abroad is the only way the WK League can receive more financial support.

It won’t be easy. Experience will be paramount. During the 2015 World Cup in Canada, a majority of the team’s players, including superstars like Ji and the captain, Cho So-hyun, were participating in the event for the first time.

The team recently returned to Korea this week from 10 days of offseason training. During that time, they lost two friendly matches against the United States 3-1 and 6-0, but the experience of competing against the Americans, who are top-ranked in women’s football, was a great aid in their development.

“Figuring out how we’re going to resolve the problems we saw in matches against the world’s best team will be our starting point to get to France in 2019,” head coach Yoon Duk-yeo said.

“Since each team has a different color and characteristic, [more friendly matches] will help our development,” Yoon said.

Still, women’s football is not Korea’s strength. The team reached its highest world ranking, 15th, with the addition of head coach Yoon, but they are not yet considered a powerhouse.

“Using the matches against the United Sates as our standard, it’s important to fill in our weakness,” Yoon said. “Women’s football has gotten a lot faster compared to the past. Our players have to adjust to the fast tempo to play better matches.”