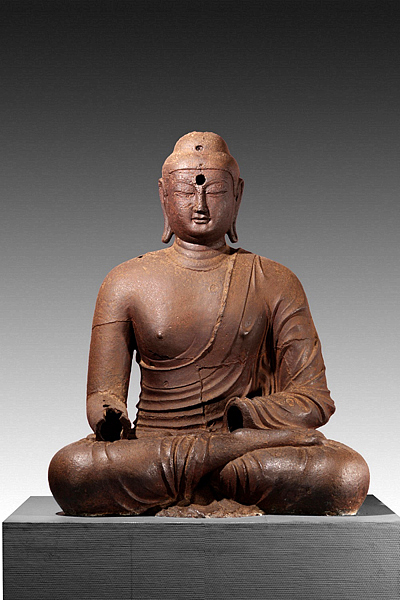 Iron Seated Buddha from the Unified Silla Period is one of the highlights of the “Metal, Iron and Steel” exhibition at the National Museum of Korea. [NATIONAL MUSEUM OF KOREA]

The National Museum of Korea’s ongoing special exhibition entitled “Metal, Iron and Steel” tells the history of iron with diverse artifacts made from the metal.

“Iron is a form of metal that can do so much more than precious gold,” said Bae Ki-dong, the Director General of the National Museum of Korea, during the press preview of the exhibition late last month.

“We chose to exhibit the history and uses of iron to show how iron has shaped human history,” he continued. “Iron has brought not only advancement but also destruction to human civilizations, and we will try to objectively show its influences through this exhibition.”

Starting with the discovery of metal near the Anatolian highlands in Turkey around 2000 B.C., the exhibition explores how metal appeared and developed in human history and goes on to unravel its advancement from cultural aspects by dividing it into three parts.

One of the distinctive elements of iron and steel is the way they positively and negatively influenced human civilizations. As iron was mass-produced, society progressed rapidly. But even before mass production, metal was used as a means to assert power throughout the world.

Rulers from the prehistoric period to the Joseon Dynasty were aware that greater productivity of iron led to greater military power, which often resulted in war.

During the Joseon Dynasty (1392-1910), influential people and the royals often used iron to show off their power. For instance, they underglazed iron on epitaphs engraved with their ancestor’s achievements and also used it to make salpo, or iron spade, which held symbolic meaning for the Sagwejang Ceremony, which was a gathering of elder government officials to honor retiring officials.

In the exhibition, one will also have the chance to see the Iron Seated Buddha from the Unified Silla Period (668-935), a magnificent statue of Buddha that is famous for its aesthetic balance of the body parts. Moreover the smoothness of the statue is another surprising factor since the parts were made separately and put together later due to its size.

Later in the Joseon Dynasty, iron becomes common enough to be used for everyday objects like shovels, cauldrons, plows, saws, mirrors and even pigments for coloring.

However, its destructive capabilities have also contributed to series of wars, especially during the Japanese Invasion of Korea in 1952 and the Manchu War of 1636, an age which saw major weapons developments.

For example, the most distinct weapon of the Joseon Dynasty is the dangpa, or trident, which was used by foot soldiers. Since it had three points, it had higher accuracy to hit the target and the points were also crooked, so it was easier to grab and trip enemy soldiers.

Iron, metal and steel are special because there is no person on earth who hasn’t been affected by the three components. They have brought enormous progress, but may have brought greater destruction to Earth and humanity.