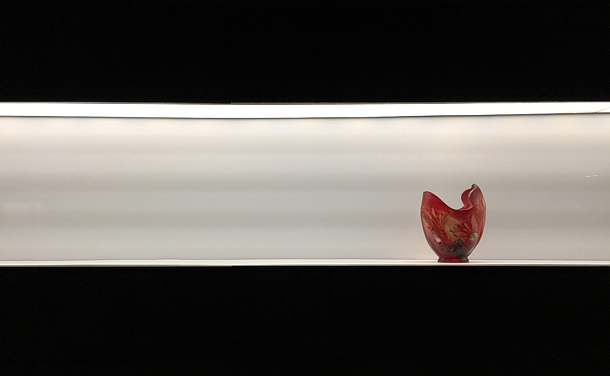 Emile Galle’s “The Bottom of the Sea Vase” is one of the highlights of Yumin Art Nouveau Collection, a new museum located in Seopjikoji cape of eastern Jeju Island. The crimson glass vase depicting coral and shellfish was inspired by Jules Verne’s “20,000 Leagues Under the Sea.” [MOON SO-YOUNG]

SEOGWIPO, Jeju - Walking around the Yumin Art Nouveau Collection museum on the Seopjikoji cape of eastern Jeju Island allows visitors to experience the two ways that great visual artists can correspond with nature. Its buildings and gardens actively embrace the volcanic island’s nature as part of them, while the glass artworks on view in the museum reproduce the flora and fauna of Northeastern France in the elegant Art Nouveau styles.

The museum, based on the collection of the late Hong Jin-ki, former chairman of the Korea JoongAng Daily’s mother paper JoongAng Ilbo, opened its doors to the public in June. But it had an official opening ceremony on Saturday with Hong Seok-hyun, son of the late Hong and chairman of the Korean Peninsula Forum, attending. The Korea JoongAng Daily visited the museum in late August before the official opening.

The museum’s gardens and buildings were originally designed by the renowned Japanese architect Ando Tadao as a meditation center nine years ago. They were recently renovated by Danish architecture team JAC Studios, who transformed the space into a museum focusing on Art Nouveau glass works.

In the gardens, the concrete walls in Tadao’s signature style, water, plants and so-called “borrowed scenery” from Jeju together create new meditative landscapes. A wall made of basalt unique to the volcanic island has an opening carefully designed so that the Seongsan Ilchulbong tuff cone, one of the island’s landmarks, can be seen clearly across the sea through the opening, just like a beautiful framed painting.

JAC Studios also attached mirror-like “shining glasses” on the facade of the entrance so that they could “reflect the horizon of the sea and with each hour the patterns and colors on the facade could change with the weather,” Johan Carlsson, founder of the studio, described.

Then, in the darkened rooms of the museum, visitors can see flowers, fruits, insects, birds, animals and mythological figures made of translucent glass gleaming in rich colors on the surfaces of jars, vases and lamps in various forms. These works, created by craft masters like Emile Galle and the Daum Brothers based in the northeastern French city Nancy, have the characteristics of Art Nouveau, a style of decorative arts that was most popular in Europe in the late 19th and early 20th centuries. In other words, they have fluid forms outlined by rhythmic and elegant curves, which were directly inspired by nature. 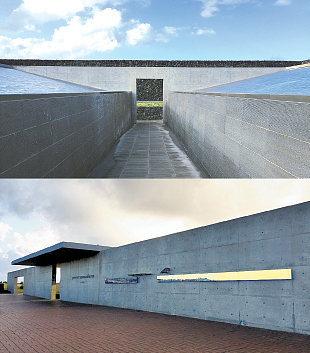 The Yumin Art Nouveau Collection’s garden designed by the renowned Japanese architect Ando Tadao, top, and the outer walls of the museum designed by Tadao and transformed by Danish architecture team JAC Studios, above. [MOON SO-YOUNG]

The museum has four rooms - the Inspiration Gallery, the Peak of Art Nouveau Gallery and the Masterpiece Gallery on the basement level and the Lounge Gallery focusing on lamps on the first floor.

The Masterpiece Gallery holds only one glass lamp created by Galle during his peak in 1902 and is one of the museum’s highlights. Depicting three branches of mushrooms that symbolize a human’s youth, middle age and old age, the lamp integrates the artist’s aesthetics and techniques, the museum said.

In addition to using his imagination inspired by works of literature, Galle studied nature as a botanist. Another of his works is “The Bottom of the Sea Vase.” The crimson glass vase depicting coral and shellfish is said to have been inspired by Jules Verne’s “20,000 Leagues Under the Sea.”

Joo Sup-il, 80, now the head of a publishing house and former JoongAng Ilbo Paris correspondent, was quoted as saying at the official opening, “I helped Yumin [the pen name of the late Hong] search through flea markets and auctions in Paris to collect masterpieces of Art Nouveau. One day I asked him why he collected only Art Nouveau glass works. He said he wanted to set up Korea’s first-ever museum specializing in it. With the intention of creating a museum, the collection was well planned to encompass the styles of the most influential artists and diverse techniques.”