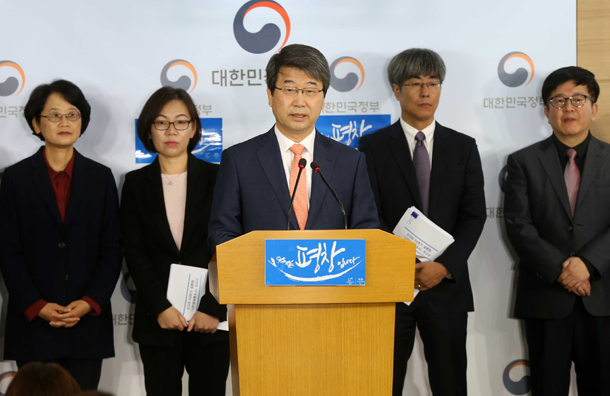 Kim Ji-hyung, center, head of the commission that managed a panel and a survey to determine whether to resume the construction of the Shin Kori 5 and 6 nuclear reactors, announces the results of his findings on Friday. [KIM SANG-SEON]

Can you guess the weight of a bull just by looking at it? You could ask hundreds of people, calculate an average and often get a more accurate number than an expert’s estimate. Proponents of collective intelligence like to cite guessing the weight of a bull as proof of its effectiveness.

Many examples can be found in other countries. Last year, the United Kingdom decided to leave the European Union. But instead of collective intelligence, Brexit was the pinnacle of collective ignorance. If the British people had made their decision after contemplating the issue, the decision should be respected. But after the referendum, many people searched online for what Brexit meant and what its impact on the country was. They voted for something without knowing what they had voted for, and many realized the gravity of their decision. A survey last year showed that 52 percent wanted to stay in the European Union.

Just because people guess the weight of a bull accurately, the average cannot be accepted as truth. In 2011, a test was conducted in Switzerland to have people guess the crime rate of various countries. Unlike when they were asked to guess a bull’s weight, people were allowed to discuss this time. The individual variation was smaller, but the average was often different from the correct number. People can narrow differences through communication, but the risk of collective prejudice can also grow.

That might have been the case in the beef crisis in 2008. When multiple people with prejudice join a group and make an argument, even the most reasonable people can be convinced. Since collective intelligence can be affected by demagogues, one needs to be wary.

The public discussion surrounding the construction of the Shin Kori 5 and 6 nuclear reactors was a case of deliberative democracy. The National Assembly has become so dysfunctional that citizens have to take the lead. There is little excuse for lawmakers.

There are several conditions that collective intelligence has to meet to become successful at public policy making. First, each individual should deliberate independently. Second, participants must understand the essence of the problem sufficiently. Lastly, various people should be included in the process. Otherwise, participants could be influenced by demagogues.

Most of successful cases of public deliberation fulfill these conditions. The restoration of New Orleans from the damage of Hurricane Katrina in 2005 began with the gathering of public opinion. The question was where to begin rebuilding, whether it be hospitals, schools or playgrounds.

The participants, who were all locals, had the ability to determine what was most important. But issues which require professional knowledge are quite different. Without prior knowledge, people cannot make sound judgments even after listening to explanations.

The Korean government is expected to bring the issue of disposing spent nuclear fuel to public discussion, but the topic requires expert knowledge. It is necessary to utilize public participation in certain areas, but if the process is overused, we may regret it someday.