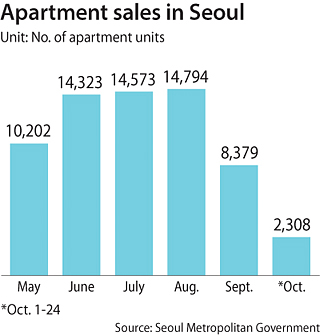 On Wednesday, the day after the Moon Jae-in government unveiled its first household debt measures, bank stocks went up 1.76 percent.

Experts say not only did the severity of the measures match earlier expectations, but also helped relieve uncertainties. As a result, investors are projecting an improvement in banks’ future performance and this led to the rise in the banks’ shares on Wednesday.

While financial market stability is likely to improve with the tougher loan regulations, the real estate market is expected to suffer significantly, especially when it comes to new apartments.

Market experts say the household debt measures will not have a major impact on the real estate market immediately as the tougher loan regulations will not be implemented until next year.

However, the pressure on the real estate market is already rising with some mortgage loan interest rates already exceeding 5 percent and additional rate hikes expected as the Bank of Korea is expected to tighten the monetary policy rate.

“It has become difficult to buy real estate by taking out bank loans,” said Ham Young-jin, head of the real estate information provider Budongsan 114. “As a result the real estate market that has been enjoying an upswing thanks to the abundant liquidity in the market and the low interest rates in the last three years will inevitably be screeching to halt.”

Those that are actually trying to buy homes are likely to be the most affected.

“When applying the tougher loan regulations, those with a smaller income will find it difficult to find loans,” said Huh Yoon-kyung, senior researcher at the Construction Economy Research Institute of Korea. “It is likely that multiple home owners will not be influenced much while the actual people who are trying to buy their own homes will be impacted.”

In fact, according to the Financial Supervisory Service report released on Wednesday, the new debt-to-income regulations that will be adopted early next year will reduce the growth of mortgage loans by 0.16 percent. When adding the June 19 and Aug. 2 real estate measures, the growth of mortgages will likely slow by 2 percent.

Some are worried that the tougher mortgages will drive loan seekers to other types of loans with higher interest rates that could eventually worsen the quality of debt.

In August the amount of non-mortgage loans, including unsecured loans as well as so-called minus accounts - loans that are used like deposit accounts - increased by 3.4 trillion won. That’s the largest increase since data has been complied in 2008.

“In apartments that are less popular, banks will be reluctant to provide mid-payment loans, which will likely drive loan seekers to alternative nonbanking financial institutions,” said Yang Ji-young, a researcher at Real Today. “This could lead to an increase in apartment sales and unoccupied units.”