Pansori singer finds herself in a new part of town : An artist who wears many hats, Lee Ja-ram sees musicals as a fun challenge to juggle with other jobs

Pansori singer finds herself in a new part of town : An artist who wears many hats, Lee Ja-ram sees musicals as a fun challenge to juggle with other jobs 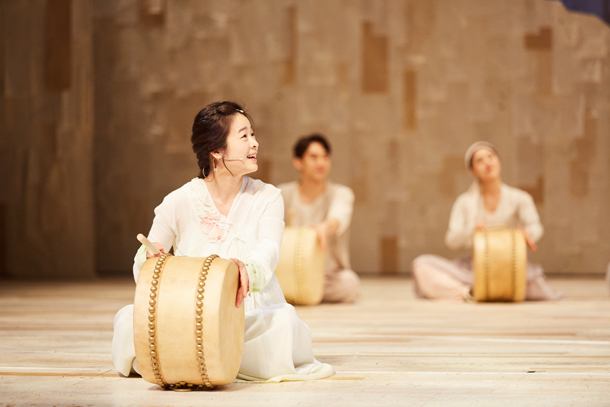 She has made a name for herself as one of the nation’s top pansori (traditional Korean narrative singing) singers, but that doesn’t seem to be enough for Lee Ja-ram. She also is a music director for changgeuk (traditional Korean opera) performances, a member of the Maybe Lee Ja-ram Band, a scriptwriter and has now made her musical debut playing the lead character Song-hwa in the musical “Seopyonje, ” which is in its fourth season.

“Seopyonje” is an adaptation of the short story “Seopyonje,” written by novelist Yi Chong-jun. The story revolves around a brother named Dong-ho, his sister Song-hwa and their father Yu-bong. It’s set in the early 1960s, when Korea was an impoverished nation.

The father, who is a strict pansori master, tries to pass on his passion for music to his children. In the process, he blinds his daughter and his son runs away to perform in a band. After Yu-bong dies, the siblings come together after many years and perform together - Song-hwa as a pansori singer and Dong-ho as a drummer.

The musical is currently being performed at the Kwanglim Art Center’s BBCH Hall in southern Seoul. It ends on Nov. 5.

How does she juggle so many different roles at the same time?

Lee says she approaches “juggling” her careers as play rather than work.

“If I lose my desire to play, I won’t be able to survive,” said Lee. “For instance, when I have to sing pansori, sometimes the weight of responsibility on my shoulders becomes too heavy that I need some kind of distraction. That’s why I play in a band. When that feels stressful, I wander away and write scripts. Then when I suddenly feel that it’s like work, I run off to singing again. In other words, all the things I do are for each other.”

To learn more about this multi-talented artist and her role in the musical, the Korea JoongAng Daily interviewed Lee last week in central Seoul. The following are edited excerpts from the interview.

Q. How do you like being a musical actor?

A. I’m a pansori singer so when I’m participating in a musical, it feels as though I am hanging out in an unfamiliar part of my neighborhood. It’s always a pleasant and precious experience that I try to make the time for. I’m thankful to be able to participate in such a great piece of work. It’s also a chance to meet a broader audience. Some come to watch the musical because I’m in it, but others come to see the musical and learn about me and then end up going to pansori performances.

So the way I feel about participating in the musical is always the same. I feel like I am going on a great battle against myself. It is an exit to escape from my mannerisms, giving me new inspiration. It is also a playground where I can meet many different people and audiences.

What do you think about your character, Song-hwa?

I was determined to distance myself as far as I could from Song-hwa’s life. Her life is full of tragedies and catastrophes. But strangely, while I was immersed in the role, a thought came to my mind: although I would never want to live such a life, we all, in some point of our life, go through hardships and learn how to endure them. When I realized that, I was thankful that Song-hwa endured the struggles. Playing her the fourth time, I came to realize why audiences say they feel consoled by her.

How are you different from other actors as a pansori singer?

It’s so great to work in someone else’s field but I sometimes get cold feet. When I need a boost of confidence, I think to myself, “I’m going to work really hard on the ‘Shimcheongga’ (one of the five pansori songs from the story of Shimcheong). I’m going to perform the best song ever.” It’s the best kind of encouragement for me, since I’m a pansori singer.

Would you join another musical that features a pansori singer?

When I face decisions about appearing in performances, the first thing I think about is how much I will enjoy the role. Is there a balance between what I can gain and what I can contribute? I always think about that. So the answer is probably “yes,” to the question.

When I agonized over whether to take the role of Song-hwa upon receiving the offer back in 2010, director Lee Ji-na told me that this will help me to experience different fields of performing arts and that she was certain it wouldn’t harm me in any way. It was so true. I gained so much from appearing not just at the premiere, but for all four seasons. It gave me the chance to see what I hadn’t experienced. It was truly a piece that brought me happiness.

People call you so many different titles. What word do you think describes you the best?

It’s too difficult to come up with one word, because I’m still on the journey of life and haven’t found all the answers yet. However, what I do know is that I’m a good performer and feel comfortable on stage. I think one of the talents I possess is performing on stage because I have done this since I was a little girl. So I’m at the point of deciding what makes me more happy, being behind the scenes as a director, or on stage as a performer.

I have reached the point where I have to make a decision. Am I most happy when I am on stage, or when I’m making music, writing scripts, or just playing in a band in front of just 10 people at a club? I’m not saying that I will just choose one profession, but I think that the direction of my life will differ according to my decision… I’m also curious to find out.