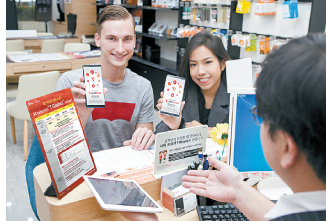 SK Telecom launched a phone plan targeting foreign residents in Korea along with a customer service app available in six languages on Wednesday.

The carrier decided to introduce the new service as the number of foreigners in Korea has been increasingly rapidly, with Ministry of Justice data showing that in August there were 1.54 million foreign residents with a visa to stay in Korea. Foreigners need to obtain a visa to stay in the country for longer than 90 days.

The so-called “T Global” phone plan has four different rates, ranging from 36,190 won ($32) to 79,200 won a month depending on the amount of free data included. The cheapest option offers 600 megabytes of data, while the most expensive option includes 17.5 gigabytes of data. Compared to most widely-used phone plans in Korea, the global plan comes with at least 300 megabytes of increased data as foreigners tend to use the internet more on their phones, the carrier said.

The plan includes a maximum 90 minutes of free international calls, but only to 20 countries within Asia. The amount of free minutes depends on the premium rate for calling across borders. The plan covers about 6,000 won worth of free overseas calls, which translates to about 90 minutes of free voice calls to China, 60 minutes to Bangladesh, but only 10 minutes to Russia. International calls outside of the 20 select countries will be charged at the normal rate.

According to an SK Telecom spokesperson, they chose the 20 countries as 48.1 percent of foreign residents in Korea are Chinese, followed by Vietnamese, accounting for 7.9 percent. Foreign residents from the United States account for only 7.1 percent and most of those are U.S. army personnel.

“Internet-based voice calls via smartphones are becoming more prevalent, however, there are still disconnections depending on telecommunications infrastructure in various countries and so free international calls are still a very necessary service for foreigners,” the company said in a statement.

The carrier is also working with KEB Hana Bank to offer a single commission-free international money transfer, which could cost as much as $80, to T Global customers. Subscribers to the phone plan have to use the bank’s money transfer app to take advantage of the benefit. The benefit is only granted once due to the heavy rate of commission, an SK Telecom spokesperson said.

The plan is open to foreign residents with a valid visa.

“It’s true that Korea lacked mobile services catered specifically for foreign residents until now,” said Song Kwang-su, senior vice president of SK Telecom’s product marketing office. “We will do our best so we can be recognized as the No.1 carrier to foreign customers as well.”

The carrier also released a mobile app in six languages - Korean, English, Chinese, Vietnamese, Indonesian and Cambodian - on Wednesday. Through the app, customers can now check their real-time phone bills, remaining data and the cost of international phone calls.