Analyst: A transition from oil to natural gas is unavoidable

Analyst: A transition from oil to natural gas is unavoidable 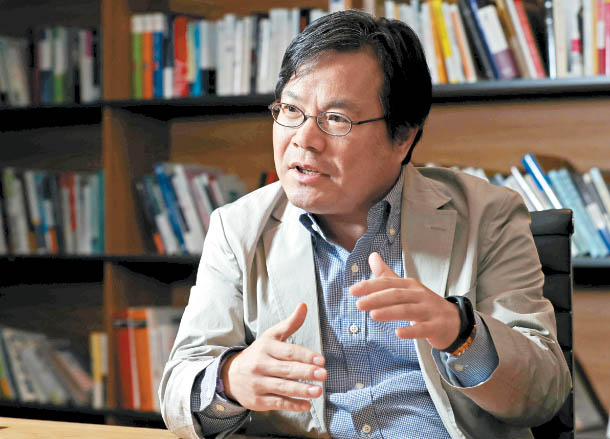 While the South Korean government struggles to single out corrupt political forces while handling North Korea’s nuclear threat, a paradigm shift is slowly taking place in the international energy market.

Established in 1909, Platts is a globally renowned media outlet that provides insider information and news on raw material and energy markets. The reason Lee is interested in energy is because he believes it is the one thing that will decide Korea’s fate. Below is an edited excerpt from his interview with the JoongAng Ilbo.

Q. A state commission recommended resuming the construction of the Shin Kori 5 and 6 nuclear reactors on Friday. What do you think about this?

A. It’s an inevitable choice considering the reality of energy consumption. But as shown in the committee’s final decision, reducing the reliance on nuclear power is necessary in the end. Safety is of the utmost importance when it comes to nuclear power. We need to start by closing down old nuclear reactors. Reactors’ operation rates should be pulled down in order to more actively conduct preventive checkups. Holding state commissions like this and opening public discussions on the issue has a positive effect in elevating general interest and awareness on energy. A lot of ordinary people have no idea of how electricity is made but people should be constantly aware of the energy problems we face today.

What do you think of nuclear power’s future?

There are currently around 450 nuclear facilities worldwide. I personally think this will be the biggest number ever. The U.S., which has the most with 99, is not constructing any new ones and European countries, except a few like France or the United Kingdom, are removing them. There are only a few countries still building nuclear facilities, including China, Russia and Korea. The number of nuclear facilities will sharply decline over the next 50 years.

Then would you say President Moon’s initiative to shut down nuclear facilities is going in the right direction? Do we have to eradicate nuclear power generators as soon as possible?

I think the so-called “energy transition” should be conducted in a radical way. The current value of energy and its future value are conflicting. There is a very complicated network behind this, with mixed interests. The choices and decisions we make today may come back to us as results 30 to 50 years later. If you think “This direction is the right way,” then you shouldn’t turn back. We need to lower our dependence on coal and nuclear.

What can be an alternative for nuclear plants?

I’ve met people from both sides: those who oppose to nuclear power and those who support it. It was hard to believe that they were all people living in the same country. Supporters talk of cheap electricity bills, whereas the opposing side highlights potential dangers. These two assertions strongly conflict, so there is no way to satisfy everybody. Although the issue seems complicated, the core question is not. It has to be viewed from a simpler perspective. We can’t reduce electricity usage. We live in a world where we cannot do anything without electricity whether its robots, data center, electric cars. These are all systems deemed to be core industries in the fourth industrial revolution. What I believe is important is natural gas.

In your book “Energy Big Bang,” are you trying to say that the world is moving on from the petroleum era to the age of natural gas?

Correct. We’re in the middle of a major transition from others fossil fuels to natural gas. It’s the kind of transformation that only comes once in a few hundred years. The helm of the global energy market is moving on to Asia. Countries [with scarce resources] like us had to endure disadvantages in the past but now the situation is changing. We might even be able to hold a superior position than others. This is our chance.

The argument about transitioning from oil to natural gas, is it a dominant hypothesis or a minor one?

I never counted which side is more pervasive. But what we clearly see is global oil giants like Exxon Mobil expanding their reach from petroleum to natural gas. The field of future investments is moving on from oil to gas. Gas has less incomplete combustion when it meets with oxygen and therefore produces less pollutants. In many aspects — in terms of thermal efficiency, environmentally and economically — the trend of moving from oil to natural gas is inevitable, as was the transition from coal to petroleum.

What will happen to petroleum in the future?

The era of oil will eventually come to an end. Before it runs dry, we’ll see a peak in demand for petroleum. But oil consumption is gradually declining as we move on to natural gas. Transportation is the industry that eats up the largest amount of petroleum, but a lot of countries will ban petroleum-powered vehicles from their streets starting from 2020 or 2030. Car manufacturers will stop producing because petroleum cars won’t sell. Naturally, we won’t see any more increases in oil consumption.

In your book, you talked about a “sure way to entangle North Korea.” What is this?

North Korea’s Achilles heel is electricity. We need to make use of this. North Korea can’t do anything at the moment because they have no electricity. The country has no future if they can’t industrialize or modernize due to electricity shortage. Kim Jong-un has all eyes on his nuclear weapons at the moment, but there will come a time when he starts considering modernization. Electricity is a must for that process. In other words, energy is the key to the problem regarding North Korea.

What did you try to convey through your book’s title?

The subtitle is “Energy is a global game-changer.” The question I tried to answer in the book was how the paradigm change surrounding energy affects the economy, world order and the Korean peninsula. A lot of complicated global issues we see today: China’s One Belt, One Road initiative, former U.S. President Obama’s Pivot to Asia strategy, Russia’s balancing strategy in South Asia and Japan’s expansion of military power are complicatedly related to energy. There’s no doubt energy is disrupting the global dynamics and world power.

In the changed game, who will be the losers and winners?

It depends on how each country reacts and adapts to the situation. For now, the biggest problem is Russia which is conducting a balancing strategy to step into Asia. If Russia stably enters Asia, it will be the winner of the “Big Bang,” but not if the attempt fails. The basis is that countries that produce energy at high costs will eventually fall behind as losers, whereas countries that successfully transform in line with the new energy era will be winners — which is likely to be the case of the U.S. and Europe.

You said we live in a time when the energy paradigm is changing. Are we, our companies and our government adapting well?

It’s true that awareness was low until now. People recognize energy after it reaches them, whether it’s the port, the gas station where they charge their cars or at home when they turn on the lights. But incredible things happen even before energy reaches us at the port. Korea is a country that has 100 percent reliance on imported energy. Therefore, a clear understanding of energy and what happens around it is crucial, such as questions like how does the energy market work, what is the relation between geopolitics and energy and so forth. The shale revolution broke out in 2005, but it was in 2010 when our country became aware of it. The current situation is urgent, so there shouldn’t be such delays.