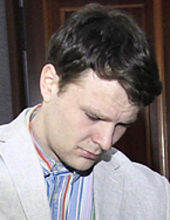 The U.S. House of Representatives on Tuesday overwhelmingly passed a bill described by congressmen as the “harshest” secondary financial sanctions ever on North Korea, named after Otto Warmbier, the American university student who died after being arrested and jailed by the Pyongyang regime.

The legislation, which passed 415 to 2, would direct the Treasury Department to ban U.S. financial institutions from engaging in transactions that benefit people or entities associated with the North Korean government.

The bill was renamed after the 22-year-old University of Virginia student from Wyoming who was arrested and convicted of “anti-state” activities in North Korea last year and died after his June return to the United States without waking from a vegetative state.

It also calls for strengthening the International Monetary Fund’s technical assistance to improve countries’ efforts against money laundering and the financing of terrorism.

A person willfully violating the regulations could be fined up to $1 million or face up to 20 years in prison, or both.

The measures can be considered secondary sanctions, which can particularly target Chinese financial institutions and companies.

“The legislation passed by the House today would hold North Korea accountable by imposing the most far-reaching sanctions ever directed at Pyongyang, putting tremendous economic pressure on the Kim Jong-un regime and its foreign enablers,” Republican Rep. Andy Barr of Kentucky, who sponsored the bill, said in a statement. “In doing so, we can deny North Korea the financing it needs to fund its nuclear and missile programs.”

Barr told the House during a floor debate that is time for “banks to choose between aiding and abetting the North Korean government or standing for peace with America and its allies.”

The UN Security Council adopted two sanction resolutions against North Korea this year, the latest on Sept. 11 following the regime’s sixth nuclear test earlier that month. Washington has also been beefing up its unilateral measures to cut off financing of its weapons of mass destructions program.

“By enacting secondary sanctions to cut off Pyongyang’s ability to finance its weapons program, Congress is sending a clear message to everyone who supports the Kim regime,” House Majority Leader Rep. Kevin McCarthy of California said in a statement. “Those who do business with North Korea support a brutal dictatorship that tortured and murdered Otto Warmbier - not because he committed a crime or threatened the North Korean government in any way, but because he was an American.”

McCarthy warned that there will be “hard consequences” for supporters of a regime “that indiscriminately murders Americans.”

Rep. Joe Wilson of South Carolina, a member of the House Foreign Affairs Committee, in a statement the same day, said the “murder” of Warmbier “reminded the world of the brutality of North Korea’s regime.” The latest sanctions, he said, are “another step toward stopping North Korea before it has the capacity to strike the United States.”

Warmbiers’ family said it was grateful for the House naming the bill after their son. They said in a statement, “Kim and his regime, tortured and brutalized Otto, causing his untimely and tragic death. North Korea must be held accountable for its actions in support of terrorism, and it should be sanctioned and added to the list of state sponsors of terrorism.”

North Korea was first designated a state sponsor of terrorism in 1988 after the bombing of a South Korean passenger flight the previous year and delisted by the George W. Bush administration in 2008.

In July, the U.S. Congress passed a sweeping package of sanctions on North Korea, Iran and Russia, including the “Korean Interdiction and Modernization of Sanctions Act,” that was signed by President Donald Trump.

A UN panel of experts in a report in September estimated that North Korea generated at least $270 million through sanctions violations between February and August.

Reuters reported Wednesday that China’s imports of iron ore and lead concentrate from North Korea plummeted to their lowest level in more than six years to 1,321 tons, worth $1.18 million and down 84 percent from a year earlier, according to data from the General Administration of Customs.