Korea may host another Rotary event in 2027

Korea may host another Rotary event in 2027 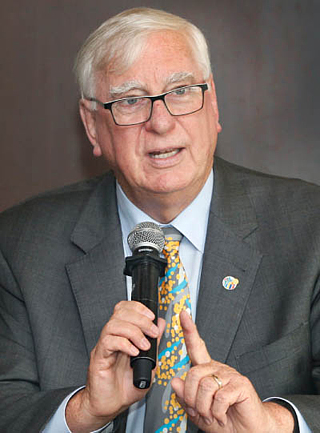 “Just over a year and a half ago, we held our annual convention at Kintex [in Ilsan, Gyeonggi], and the convention was hugely successful,” Riseley said in a press conference at Lotte Hotel Seoul. “We had almost a record number of attendees from around the world, around 43,500. We are about to, or have just decided upon, the sites for years 2023, 2024 and 2025.”

He added, “So 2027 would be in the next batch. And it is an exhaustive process that we go through to determine whether a city is capable of hosting a significant event like a rotary convention. But of course we know from the success of 2016 that Seoul could certainly do so.”

Some Rotarians in Korea hope to host the convention once more in 2027, the centennial of the start of Rotary clubs in Korea.

“We are making preparations to make the bid to host the convention in Busan in 2027,” said Moon Eun-soo, director of the district group in Cheonan, South Chungcheong. “Because the area has a convention hall able to host some tens of thousands of people at once, accommodations that can host at least 7,000 will be built and the Gimhae airport in the vicinity will be renovated into an international airport by 2026.”

Rotary International has 1.2 million members in more than 200 countries, of which 65,000 are from Korea, the fourth-largest group of members from one country, according to the organization.

One of its flagship goals is to completely eradicate polio, which it expects will be possible by next year. Rotary has contributed more than $1.5 billion to immunize more than 2.5 billion children in 122 countries, including some $14.6 million from Korean Rotary clubs as of 2016, according to the organization.

“The support for polio eradication has been strong from Rotarians around the world and from Korea,” Riseley said. “They contribute directly to our polio eradication campaign. And they also advocate with companies and governments to arrange for the contribution from them.”

“Korea has donated some $4 million in the last four years,” said Yun Sang-koo, who was the chair of the organizing committee for the convention last year. “And the Korean government has promised another $4 million.”