Most foreign players that join the Korea Baseball Organization (KBO) come from the major or minor leagues, and they often return to the United States after their stint here. Former Hanwha Eagles pitcher Esmil Rogers, who returned to the minor league last year, is set to become one of only a handful of players to come back again after signing a new contract with the Nexen Heroes. 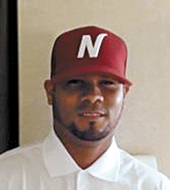 “We signed with our new foreign pitcher Rogers at $1.5 million, the club’s highest contract, for the 2018 season,” said the Heroes on Thursday.

Rogers made his major league debut with the Colorado Rockies on September 12, 2009, where he gave up two runs and three hits in four innings. After three seasons with the Rockies, Rogers played for the Cleveland Indians, Toronto Blue Jays and New York Yankees before donning the bright orange of the Eagles. Utilizing his tall height, standing at 1.92 meters (6 feet, 3 inches), Rogers specializes in fastballs - pitching at an average speed of 150 kilometers (93 miles) per hour - as well as cutters, sliders, changeups and curves.

Rogers pitched a complete game on his KBO debut in August 2015. He then followed this up with a second complete game, becoming the first pitcher ever to debut with two full games in the KBO. Throughout the season, Rogers appeared in ten games, picking up six wins and two losses with a 2.97 ERA. Unsurprisingly, the Eagles renewed Rogers’ contract at the start of the 2016 season, but had to let him go in June of that year due to continuous elbow pain. Rogers picked up eight wins and five losses with a 3.41 ERA in his KBO career.

Once the Heroes released Rogers, he moved back to the United States and underwent surgery to reconnect his elbow tendon. After a year of rehabilitation, he signed a minor league contract with the Washington Nationals in July this year. In the minor league, Rogers started in seven games and picked up three wins and two losses with a 3.18 ERA. Since the end of the season, Rogers had been playing in the Dominican League, also known as the Winter League.

“I’m thankful to the Nexen Heroes for giving me another chance to play baseball in the KBO,” Rogers said.

Rogers didn’t need much encouragement to join the Heroes, as he knew how much potential the team had from his time playing against them. After the signing, Rogers said he’ll try his best to help the team to a Korean Series victory.