Moon takes to the mound to open series

Moon takes to the mound to open series 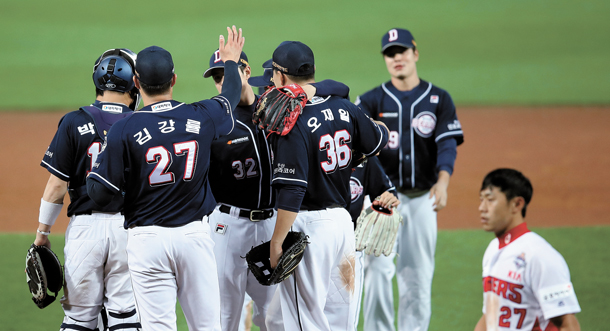 The Doosan Bears celebrate after winning 5-3 in the first Korean Series Game against the Kia Tigers at Gwangju-Kia Champions Field on Wednesday. [YONHAP]

The first game of the Korean Series at Gwangju-Kia Champions Field had a sellout crowd of 19,600 fans on Wednesday, with some fans waiting four to five hours in line in the hopes of purchasing a ticket that day. 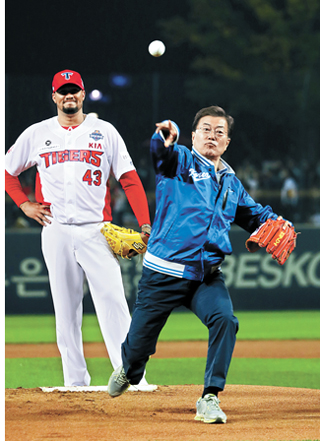 The crowd was certainly in for a surprise, as President Moon Jae-in threw the ceremonial first pitch. As Kim Eun-yong, former manager of the Tigers, was scheduled to be the ceremonial pitcher as the series returned to Gwangju for the first time in eight years, Moon’s appearance was certainly unexpected. As expected, Kim appeared on the mound first as the ceremonial pitcher, but a minute after, Moon made his appearance on the field. Even catcher Kim Min-sik was unaware that the president would throw.

This was the first time in four years, since the third game of the Korean Series in 2013, that a president has made the ceremonial first pitch. The pitch fulfilled an election pledge - Moon had promised to throw the first pitch for the team that had the largest number of officials and players post selfies to show that they voted during the election.

Since the Tigers won the contest in May, Moon made the first pitch in the Korean Series game, becoming the fourth president ever to do so.

Since Kim made two ceremonial first pitches, former President Park Geun-hye was the third president to do so, during the third Korean Series game between the Samsung Lions and the Bears in 2013.

Former President Chun Doo-hwan is another notable ceremonial pitcher, as he made the first pitch in the very first KBO game in 1982, the year the league was established.

Since Oct. 24, 1987, the Kia Tigers have held 17 sellout Korean Series games. Though the Tigers’ new stadium can hold up to 20,500 fans, the KBO and the Tigers agreed to sell 900 fewer grass seats for safety reasons.

Even when the Tigers were called the Haitai Tigers, they were known for their fans. After the Tigers took the lead in the KBO in April, the total number of fans visiting Gwangju-Kia Champions Field increased by 32 percent this season when compared to last year, a total of 773,499 fans.

Despite the sellout crowd, the Tigers gave away the lead in the Korean Series to the Doosan Bears, losing the first game 5-3. Oh Jae-il, who scored a home run, was especially lucky as the ball landed in Kia Motors’ home run zone. As a result, Oh won 36 million won and a brand new Kia Stinger.

“We got off to a great start in the first game,” said the Bears’ manager Kim Tae-hyung. “Our players can play more comfortably in the remaining games. The major contributor of the first game was probably catcher Park Se-hyuk. And with Kim Jae-hwan and Oh Jae-il’s home runs, we were able to win.”

The second game in Gwangju also had a sellout crowd, marking the Tigers’ 18th consecutive Korean Series game sellout. Having played two games in Gwangju, the next three games of the Korean Series will be held at Jamsil Baseball Stadium in Seoul starting tomorrow.