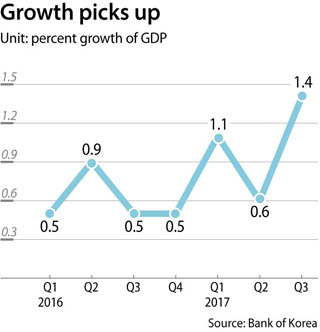 Korea’s economy grew at the fastest rate in more than seven years in the third quarter, bolstered by robust exports and the government’s supplementary budget.

The Bank of Korea said Thursday that the economy expanded 1.4 percent between July and September in an advance estimate compared to the previous quarter, and year-on-year growth was 3.6 percent.

That buoyed hopes that the country will achieve 3 percent yearly growth in 2017, and could also be a factor in the central bank deciding to raise interest rates soon.

Even with minus 0.54 percent growth in the fourth quarter, the country could fulfill the BOK’s 2017 hope for 3 percent growth, according to Chung Kyu-il, director general of the Economic Statistics Department at the Bank of Korea.

“Exports expanded by 6.1 percent, with increases in exports of semiconductors, chemical products and motor vehicles,” the central bank said in a statement.

The execution of the government’s supplementary budget also played a role in pushing the economy upward as government spending rose 2.3 percent compared to the previous period, the highest rate since the first quarter of 2012.

“Government spending for health benefits increased and the budget for job creation was executed,” Chung said, adding that 70 percent of the proposed extra budget has been spent.

Consumption in the private sector showed moderate growth of 0.7 percent.

Economists predicted that exports will fare well in the coming months while their predictions for domestic consumption were mixed.

“We expect the continuation of the global synchronous recovery to lend support to Korea’s export sector,” said Deyi Tan and Jin Choi, economists at Morgan Stanley, in their report.

“We believe the spillover to domestic demand would likely remain uneven,” the report read. “We expect the recovery in consumer spending to be mild given a still overextended household balance-sheet and the need to pay down on debt.”

“The near-term outlook for electronics exports remains favorable, with the IHS Markit Global Electronics Purchasing Manager’s Index for September continuing to signal that growth remains robust in the global electronics industry, underpinned by sharp expansions in output and new orders,” the economist said. “Electronics demand remains strong in the U.S., Europe and China,”

The strong performance will likely push the central bank to start tightening the economy with a possible interest rate hike in November.

After the October monetary committee meeting, BOK Governor Lee Ju-yeol mentioned that the conditions for tightening had been formed. “Momentum will likely go on in the fourth quarter,” said Park Jeong-woo, an analyst at Korea Investment and Securities.