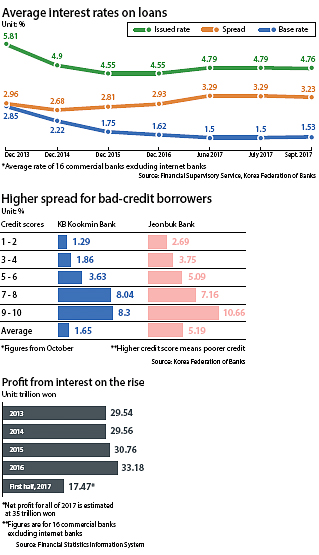 Months later, there is now evidence that the two internet banks, K bank and Kakao Bank, have forced competitors to lower their rates, and they’re doing it through a mechanism called “spread.”

Spread in this case refers to the difference between the bank’s base rate on which interest rates are calculated and the actual rate that borrowers have to pay on their loans. The spread differs with each borrower based on credit score and other factors that banks do not disclose for “confidential business strategy” reasons.

Data from financial authorities show that banks have been lowering their spread ever since K bank and Kakao Bank launched earlier this year. In August, shortly after Kakao Bank went online, the average spread among 16 commercial banks fell from 3.28 percent the previous month to 3.21 percent. By comparison, Kakao Bank’s spread in August was 2.11 percent, the second-lowest in the country.

Analysts believe the industry-wide spread reduction was the result of banks reacting to the low-interest loans that Kakao Bank was offering with annual rates as low as 2 percent.

As of this month, the average spread for high-credit borrowers at commercial banks has dropped to 2.16 percent, according to data from the Korea Federation of Banks. With the base rate at 1.52 percent, that means borrowers are paying an average rate of 3.68 percent, still not as low as Kakao’s rates but lower than in the past.

An official from the Financial Supervisory Service explained that Citibank’s regular loans include credit card loans, which normally charge higher rates, and regional banks like Gwangju Bank and Jeonbuk Bank tend to lend to borrowers with lower credit scores than bigger banks like KB Kookmin Bank, leading to a wider spread.

Banks, when they change their spread, often cite reasons like shifting business conditions. They tend to raise the spread when the base rate falls to ensure a certain level of profitability, otherwise interest rates actually charged to borrowers will fall with it.

But the emergence of internet banks is breaking the trend of the past four years, and commercial banks are finally starting to lower their spread to compete.

Still, some believe it’s too little, too late. The amount of household debt in Korea has snowballed to record levels since many households have taken out loans believing interest rates are low when in fact the banks’ adjusted spread has ensured rates remain level. Banks’ profit from interest, which was less than 30 trillion won ($26.7 billion) in 2013, is now expected to surpass 35 trillion won this year.

“It is impossible for borrowers to estimate interest rates because banks change their spread frequently,” said Lee Jae-yeon, a senior researcher at the Korea Institute of Finance. “We need to monitor whether these banks are dumping the burden of mismanagement on consumers by raising the spread.”