Heading for a split?

Heading for a split? 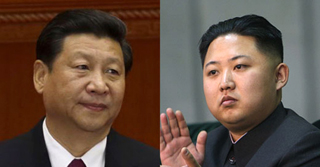 It was not long after the Yeonpyeong shelling in November 2010.

The Hong Kong representative of China’s foreign ministry made the argument that both sides are responsible. He was invited to give a lecture to the Chinese students at the Hong Kong University of Science and Technology.

While it was North Korea that fired artillery on the inhabited island near the tense maritime border in the Yellow Sea, the high-level Chinese foreign ministry official said that both South and North Korea were accountable. When it was obvious which side was at fault, he defended North Korea, revealing how Beijing feels about Pyongyang.

Kim Jong-il was cornered after the sinking of the Cheonan in March of that year. So he visited Beijing and three Northeast Provinces of China in May and August to affirm China’s support. The Yeonpyeong attack occurred after North Korea and China reconfirmed their solid relationship.

Around that time, a source from a U.S. investment bank’s Hong Kong branch shared his view on the North Korea-China relations in private. He simply compared the ties to the moment of ordering a “stop-loss” in stock market. A stop-loss order is when an investor instructs the broker to automatically sell the stock if it drops to a certain price.

“China intervened in the Korean War and saved the North Korean regime Therefore, it believes it has a share in Kim Jong-il’s regime. North Korea was once a blue chip, providing considerable logistical support during the Chinese Civil War. But now, the value has fallen to one tenth. China is contemplating whether to sell it at a loss,” the official said.

The United States has begun to pressure China once again. It is no longer looking for nominal sanctions to avoid criticism from the United States. The trainer has the stick, and the panda can no longer slack off.

If China implements sanctions earnestly, such as shutting off its oil supplies, North Korea will be faced with a collapse. It will be the moment of ordering a “stop-loss.” China would suffer a great loss by bringing down North Korea with its own hands, but it doesn’t want to be bypassed if Pyongyang and Washington begin nuclear negotiations before Beijing acts.

Why has China been taking sides with North Korea? The Chinese Communist Party leaders were reportedly shocked at how easily and quickly a war nearly broke out when the Yeonpyeong shelling took place. As China desperately needed time to become rich and strong, a war would have been a nightmare. It may have hoped that defending North Korea and offering carrots would make it docile. Despite China’s anticipation, North Korea strictly followed its own strategy and calculation. Now, it’s time for the stick.