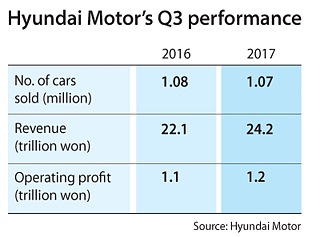 Hyundai Motor’s net profit in the third quarter this year fell 16 percent on-year as the automaker continues to struggle in major global markets including the United States and China.

Yet its revenue and operating profit exceeded market consensus on the back of sales growth in domestic and emerging markets.

By number of cars sold, Hyundai Motor did better in Korea and emerging markets. It sold 517,350 cars in Korea this year as of September, a 7.5 percent increase compared to the same period last year. In Russia, the number of cars sold grew by 11.2 percent year-on-year, up to 113,000 cars. In Brazil the figure also rose by 7.8 percent on-year.

Yet the growth was not enough to compensate for poor sales in the U.S. and China.

In China, Hyundai Motor sold 489,000 vehicles during the Jan.-Sept. period, recording a 37.2 percent year-on-year fall. In the United States, the accumulated number of cars sold this year until September was 265,000 units, which is 11.8 percent less than what was sold last year in the same period.

“Up until the end of the third quarter, the general demand for cars in China rose by 2.3 percent year-on-year, but due to negative sentiment toward Korea, Hyundai Motor’s sales in China plunged by 37 percent,” said Koo Za-young, an investor relations executive at the auto company, during a conference call on Thursday. “Amid an unstable environment, Hyundai Motor will avoid short-term strategy but will try to establish a firm foothold in the local market,” Koo added.

The automaker’s underperforming sales in the U.S. came from a lack of new models, especially SUVs, which are gaining in popularity there.

“A drop in demand for sedans, which are Hyundai Motor’s strong point, resulted in slow growth,” said Choi Byung-cheol, chief financial officer at the company.

“The intensifying competition seems to continue for a while there and Hyundai Motor will try to recover sales with the launch of Kona at the end of this year,” Choi added.

In China, the company said it will have seven SUV models by the year 2020, in order to target local consumers, on top of other models that will launch there. Hyundai Motor currently has four SUV models being sold in China.

In the United States, Hyundai Motor expects its new assurance program, which guarantees transparent pricing, as well as the launch of the Kona this year and the Genesis G70 next year to help it recover from a sales slump there.

“We will respond flexibly to local market demand and fortify monitoring on a possible FTA amendment next year,” Choi said.