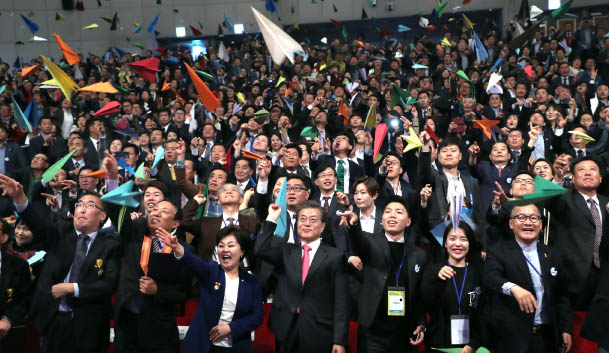 President Moon Jae-in, center front, and leaders of many local governments fly paper planes as a symbol of flying-high local governments at a ceremony to strengthen regional autonomy and decentralize power at the Yeosu Expo Convention Center in South Jeolla on Thursday. [YONHAP]

President Moon Jae-in will follow through with his campaign pledge to amend the Constitution to strengthen regional autonomy and decentralize power, he said on Thursday during a speech at the Yeosu Expo Convention Center in South Jeolla.

“I will push forward with the constitutional amendment to achieve regional autonomy,” Moon said, reiterating his promise to treat the heads of metropolitan cities and provinces as importantly as cabinet ministers.

Moon announced plans in August to hold a June referendum to amend the Constitution. At the time, he urged the National Assembly to make an amendment bill, adding that the government can also draft a bill if the legislature fails to create a plan in time.

But even with the local election on June 13 drawing near, progress has been slow, with lawmakers split over how to replace the current five-year, single-term presidency.

In his speech on Thursday, Moon said the amendment will give local governments independence in legislative, administrative, fiscal and welfare powers.

“Regional leaders who started their careers through local elections have become great politicians,” he said, reminding the public that local government heads ran in ruling and opposition parties’ presidential primaries this year.

Ahead of the ceremony, Moon met with 17 leaders of the metropolitan cities and provinces. It was his second meeting with local government leaders, after one at the Blue House in June, shortly after he took office in May.

The visit to Yeosu marks Moon’s fifth visit to the Jeolla region since taking office in May and his second visit this week alone, after visiting Gwangju on Wednesday to throw the ceremonial first pitch at the opening game of the Korean Series.

Frequent presidential visits to Jeolla are usually related to June local elections, and Moon is no exception.

He won overwhelming victories in Gwangju and South and North Jeolla during the May presidential election.

The People’s Party, which secured 40 seats largely based on the Jeolla voters’ backing in the 2016 legislative election, is currently split over its Chairman Ahn Cheol-soo’s push to merge with the conservative Bareun Party. Veteran lawmakers with strong ties to the region protested the plan, threatening to quit the party.

If they join the Democratic Party, Moon’s ruling party will be closer to securing a majority in the 299-member legislature. It currently has 121 lawmakers.