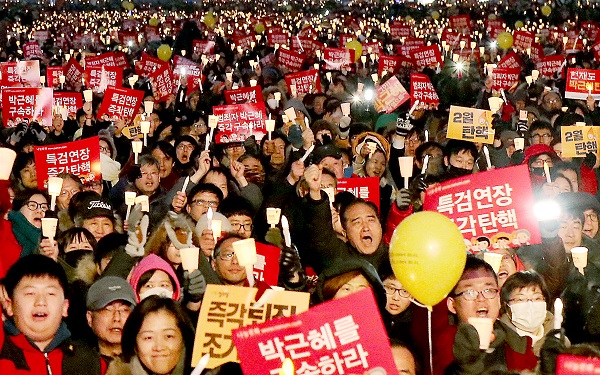 Saturday’s rally to commemorate last year’s candlelight vigils to demand the ouster of former President Park Geun-hye for corruption has split in two due to disagreements over whether to march to the Blue House, as was customary during the original rallies.

One rally will be held in Gwanghwamun Square in central Seoul, where thousands gathered every Saturday from Oct. 29, 2016, to March, and participants will then march toward the Blue House. Park was impeached in December and removed from office by the Constitutional Court in March for allowing her secret inner circle to influence state affairs for private gain.

“The commemoration rally will be a moment to confirm the people’s will to root out corruption and reform society,” said one rally organizer.
Another rally will be held in Yeouido, western Seoul, where participants will march from National Assembly Station to the Liberty Korea Party headquarters. The Liberty Korea Party, formerly Saenuri Party, was Park’s party. Organizers say some 1,300 have registered to take part.

“Marching to the Blue House from Gwanghwamun is outmoded,” posted one user in an online community where many members are self-claimed supporters of President Moon Jae-in. Moon took office on May 10 after a snap election the previous day.

“If the march to the Blue House is not cancelled, I am going to withdraw my membership here,” wrote another user on the website of People’s Solidarity for Participatory Democracy, one of some 1,500 civic groups that organized the anti-Park rallies.

“I don’t mean to start a fight with the participants of the rally at Gwanghwamun,” said one woman in her 30s, who reported the Yeouido rally to police. “I participated in the weekly candlelight vigils 15 times. While I support President Moon, I am not one of his fans on those online communities.”

She added, “I think now is the time to root out corruption in the National Assembly, especially in the opposition parties. The only thing that’s changed in the rally is the direction. Now we are moving to Yeouido instead of the Blue House.”

Meanwhile, organizers of the Gwanghwamun rally are debating whether to march to the Blue House.
“We’re discussing what exactly to do on Saturday,” said Park Jin, one of the organizers.
“We planned the march to the Blue House simply as a performance to remember our successful rallies,” said another organizer. “We didn’t think it was going to spark such controversy. Organizers are discussing internally what to do.”

“Millions of people became one in the candlelight vigils,” said Yoon Pyung-joong, a philosophy professor at Hanshin University in Osan, Gyeonggi. “But they are in fact people of different gender, age, economic status, regions and beliefs. One group should not try to define the movement as they wish.”