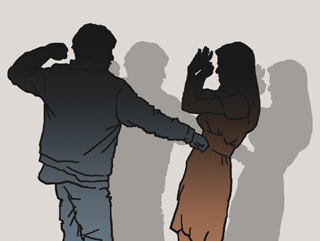 Last summer, a video showing a man driving a truck toward his ex-girlfriend shocked the country. But we have seen little progress in the year since.

According to the National Police Agency, 8,367 people were admitted to hospitals as victims of dating violence. Over the past five years, the number of victims who suffered violence or who were killed increased by more than 10 percent every year.

There are a total of 36,000 victims during this period.

Many of young women do not know that what they are suffering is, in fact, dating violence.

As a result, many hesitate to make reports to the police, and therefore, there are more cases of dating violence and stalking than are included in the statistics.

Counseling records show that many women say they do not want to start a new relationships because they are fearful of revenge by former lovers, indicating a lack of systems to protect such victims.

The Prevention of Domestic Violence Act punishes spousal abuse, but violence committed by a lover in only covered by criminal law. When such acts are habitual, the offender may have to pay up to 100,000 won ($88.46) or face a short detention period.

Here is a question. Does the state have no responsibility in dating violence? In England, controlling, coercing, threatening, violent or abusive acts against a person over 16 years of age by a close partner or a family member is punishable by the law that governs domestic violence.

Clare’s Law also allows people to request government information about their partner’s past.

In the United States, the Violence Against Women Act of 1994 also made clear that violence committed by a partner or a former lover is a felony.

A bill proposed in Korea to support those who have faced dating violence says that police must respond to protect dating violence victims and conduct on-site investigations.

Dating violence often starts with a light spat between lovers, but intensifies to more heinous crimes.

Therefore, a system to protect victims is needed as much as a strengthening of punishment for offenders.

Some say that a greater legal measure is needed to resolve the problem of dating violence.

Whether committed by a lover, a spouse or a stranger, such acts of violence stem from society’s rampant violence toward women.

Therefore, we may need to create a more comprehensive law to prevent such violence.

And we must do more than creating a law. We need to seriously think about how relationships won’t be ruined by violence.

We must teach our children and youngsters about relationships in which partners ask each other what they actually want and have consensual sex.

And we must also seriously think about whether we are doing so properly.

Many young men are first exposed to abusive sexual acts in pornography and they believe it is manly to force their partners to have sex.

Women, therefore, are often fearful that their lovers would become violent at any time.
Media sensationalism is also a problem.

Reporting about dating violence without analysis will only amplify the fears of young women. Victims of violence often get confused as to whether they are being loved or abused.

The media must let them know that they are experiencing violence and how they can respond, because more than half the women who experienced dating violence say they were confused when the violence first took place in the early stage of their relationships, and so they stayed on.

*The author is the director of Research Department for Women’s Human Rights & Safety at the Korean Women’s Development Institute.