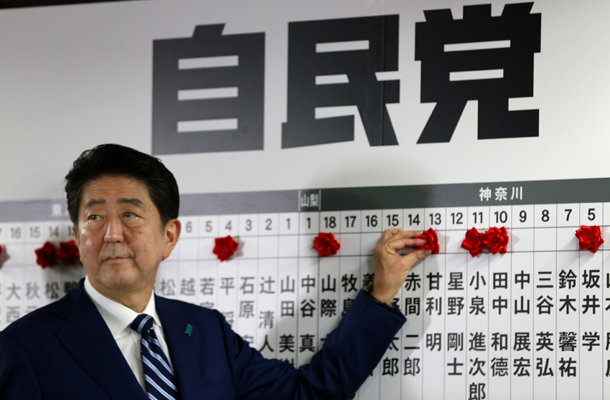 When a reporter recently pointed out that Japanese Prime Minister Shinzo Abe said little about constitutional revision during the campaign, he responded, “It is our duty to talk about what people want to hear in street rallies, such as the future of Japan, the low birthrate and population aging.”

The exchange was from a news conference on Oct. 23, the day after the Liberal Democratic Party won 284 of the 465 seats in the House of Representatives. In fact, the key issue in Abe’s campaign was not constitutional revision but the security crisis and North Korean threats, Abe’s relationship with U.S. President Donald Trump, Abenomics, the low birthrate, demographic aging, jobs and welfare.

We always condemned Abe’s attitude as sly and cowardly. In fact, the attempt to revise the pacifist clause in the Japanese constitution is surely an ambition to become a country that can wage war. But the strength of Abe’s politics is knowing how to hide his claws, going the long way, and pursuing what people want first in order to win what he really wants in the end. He surely is a nasty figure to Koreans. But he kept the power for five years since returning to leadership in December 2012 and is likely to become the longest-serving post-war prime minister in Japan.

In fact, the urgent issues that Abe mentioned are not limited to Japan. Korea is directly involved in the security crisis, and low birthrate and demographic aging are also serious problems in Korea. The number of babies born in August was the lowest since the statistics began to be recorded in 2000. The aggregated rate of the average number of children a woman has in her lifetime is 1.1, lower that Japan’s 1.4.

But lately, Korea is focusing on eradicating so-called longstanding evils, openly and drastically. Just like Abe’s constitutional revision, the new administration has been biding time to correct the vices of the past decade. In this security crisis, officials who had been in high-profile positions in the Park Geun-hye administration are taking overseas training.

Is the reform the priority task that Korea needs to adhere to? In order to avoid the criticism five years later that its only accomplishment was eradicating corruption, we need to learn how to get what people really want.

*The author is a deputy international news editor of the JoongAng Ilbo.