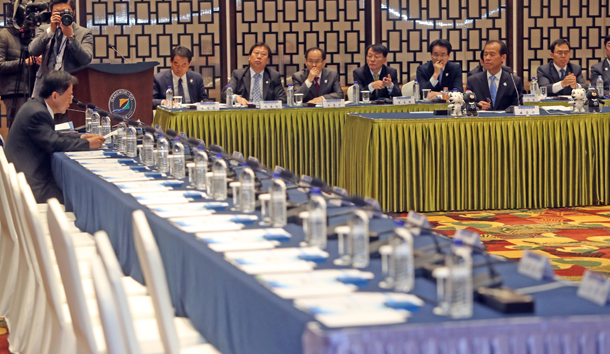 Seats for lawmakers from the Liberty Korea Party are vacant at a parliamentary audit into Gangwon Provincial Government at Yongpyong Resort in Gangwon on Friday, as the opposition party boycotted all the routine government inspections by the National Assembly. [YONHAP]

The Liberty Korea Party boycotted the routine government inspection at the National Assembly after the Korea Communications Commission appointed two people recommended by the ruling Democratic Party as board members at the Foundation for Broadcast Culture (FBC), the largest shareholder of MBC.

“The current administration is trying to take over public broadcasting,” said Rep. Chung Woo-taik, floor leader of the LKP, in a general meeting with lawmakers on Friday afternoon. “The appointment of board members at FBC is an illegal act of violence.”

The Korea Communications Commission is a central governmental administrative organization that operates directly under the president. One of its main goals is to ensure broadcasting independence.

On Thursday, it appointed Kim Kyung-hwan, professor at Sangji University in Gangwon, and Lee Jin-soon, a member of the policy committee of the Citizen’s Coalition for Democratic Media, as new board members at FBC. The two were nominated by the Democratic Party.

The appointment followed the resignation of two board members, Yoo Eui-sun, professor at Ewha Womans University and Kim Wuen-bae, director of the Daejeon Branch of Unification Education Members of the Ministry of Unification, who were nominated by the Saenuri Party, the LKP’s former name.

With the new appointments, there are now five board members of the FBC who were recommended by the Democratic Party and four by the opposition parties.

“President Moon Jae-in is behind this scheme to take over public broadcasting and he must carry all legal and political responsibilities for the action,” Rep. Chung said. “Chairman Lee Hyo-sung of the Korea Communications Commission must resign.”

The LKP submitted a resolution in the general meeting Friday that demanded the dismissal of Chairman Lee, and said that it will submit an injunction to cancel the appointment of the two new board members at the FBC.

With the LKP’s boycott, some 10 standing committees, including the Legislation and Judiciary Committee and the National Policy Committee, had to carry out the routine government inspection without the LKP lawmakers.

“If the LKP wants to ensure independence of public broadcasting,” she said, “it must request a correction within the routine government inspection instead of marching out of it.”

With the new appointments of board members at the FBC, the likelihood of it asking for the resignation of its chairman, Koh Young-ju, and MBC president and CEO, Kim Jang-kyom, may increase.

The two were appointed during the former Park Geun-hye administration. Because the FBC is the largest shareholder of MBC, it can request the resignation of MBC’s president.

“Because the two former FBC board members resigned without finishing their [three-year] term, the newly appointed members must only serve for the remainder of the former members’ tenure, as it is written in the Act on the Establishment and Operation of Korea Communications Commission,” Rep. Chung said. “Because the two former board members who resigned were nominated by the Saenuri Party, the LKP has the right to nominate the new members in their place.”